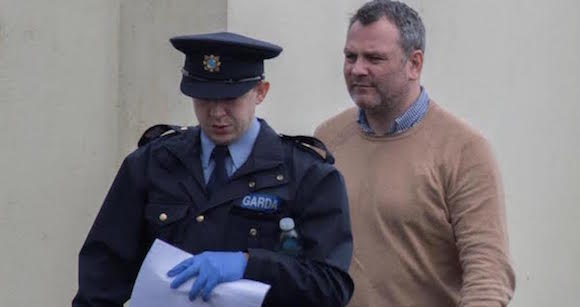 A man who smeared excrement over the cells in Buncrana Garda Station after becoming involved in a row with local youths paid the local court €300 to avoid a criminal conviction.

John Vernon, 43, of 17 The Bay Apartments, Cushendall, Co. Antrim, was charged with being threatening and abusive and being intoxicated at Buncrana Main Street on Sunday evening.

He was also charged with criminal damage to a cell at Buncrana Garda Station by urinating on the floor, defecating in the cell and smearing excrement all over the door.

Vernon, who has no previous convictions, appeared before Buncrana District Court yesterday morning in handcuffs after he was arrested the previous day.

The court heard that gardaí received a report of an intoxicated male being abusive to people outside a licensed premises in Buncrana.

Garda Mulkerrins and McHugh went to the scene where they saw Vernon, who said he was assaulted and his phone was stolen.

Garda Inspector Barry Doyle said Vernon told gardaí he was gay and accused them of discriminating against him. However, when they tried to take a statement from him he refused to give them details of his attackers and continued to antagonise a group of local youths.

Insp. Doyle said there were reports that Vernon had made derogatory sexual references to a number of males locally.

When he was arrested under he public order act, he continued to make threats towards the gardaí and resisted arrest.

Insp. Doyle said on return to the Garda Station in Buncrana, Vernon stripped off and defecated in the cell.

Defence solicitor Ciaran MacLochlainn said his client is a 43-year-old married man, who is HIV positive and suffers from depression and anxiety.

He said Mr. Vernon has a drink problem and he has no memory of the whole incident.

“He came to Buncrana to visit his mum, who has a caravan here, and ended up going to the pubs for a few drinks,” said Mr. MacLochlainn.

“He had an altercation with locals, which he probably brought on himself, and this resulted in him being assaulted and losing his phone. He was intoxicated and ultra aggressive and the gardaí arrested him – probably for his own good as there was a group of locals gathered at Market Square in Buncrana.”

The defence solicitor said his client wanted to apologise to the gardaí for what he did in the Garda Station, putting it down to his ‘combination of medication and alcohol’.

Judge Paul Kelly asked what his client had proposed to remedy the ‘disgusting aftermath’ of his behaviour, with Insp. Doyle said a cleaning job of the cell would likely cost €200.

Mr. MacLochlainn said he had asked his client’s husband to ‘rustle up’ some money. Judge Kelly said if Vernon came up with €300 – €200 for the Garda Station and a further €100 as a charitable donation to St. Vincent de Paul, he would leave him with a clean record.

Mr Vernon paid the money into court in Letterkenny on Tuesday and was released.