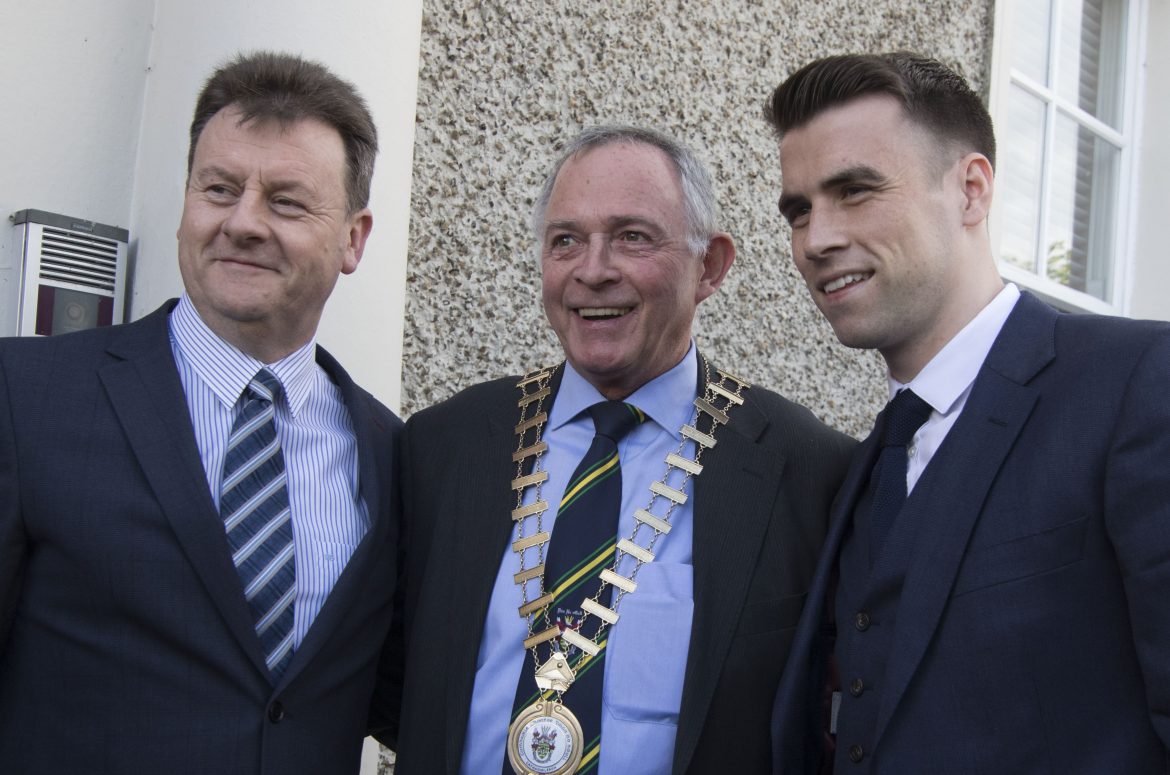 ‘Emotional’ Seamus Coleman given the Freedom of Donegal

SEAMUS COLEMAN admitted to being “a little emotional” at the Civic Reception to award the Republic of Ireland captain Freedom of the County in Lifford this evening.

Coleman was joined by his wife Rachel and daughter Lilly, parents Henry and Máire and brothers Stephen and Francis at Lifford County House.

The Everton full-back’s award sees him follow in the sporting footsteps of the likes of former Republic of Ireland goalkeepers Shay Given and Packie Bonner, 1992 All-Ireland winning captain Anthony Molloy and Jim McGuinness and his panel, who captured Sam Maguire in 2012, as well as Finn Harps’ FAI Cup winners of 1974.

The Killybegs native suffered a broken fibula and tibia in Ireland’s qualifier against Wales in March following a dangerous tackle that saw Welsh left-back Neil Taylor given a straight red card in the scoreless draw.

“It means a lot to me,” he said of the award. “The journey I’ve been on – obviously it’s not been as straight-forward as you think – it’s been a tough journey with plenty of setbacks along the way and big decisions to make. It’s a little emotional.

“My favourite car journey of the year is when we get to pack up and head to Holyhead after the last game of the season,” he said.  “This year it’s a bit different. I’m well settled over there with my wife and daughter so I go in now and get my bit done and I’m really focusing hard.

“You can’t underestimate how important rehab is, whether it’s changing your diet and eating well so when you do come back then you’re in tip-top shape. Mentally I’ve no concerns and I know that I will back. It’s a very clichéd thing to say about being fitter and stronger but I’ve no doubt I will be coming back the same player.”

Coleman holds no grudges against Taylor following the tackle and said the Aston Villa played has been in contact since.

“Look football is a contact sport,” Coleman added. “No player goes out to break another player’s leg on a football pitch. There’s no hard feelings. I’ve got my own journey to concentrate on.

“I suppose if there had’ve been a European Championships this summer or an FA Cup final or semi-final it would’ve been a bit tougher. I got a clear summer – I know I will miss the Ireland games – but I’m ready to crack on. I’m looking forward to getting back.”

Coleman has not set himself any targets of a possible return following the injury that looks likely to keep him out for the remainder of the Republic of Ireland’s qualifiers for next year’s World Cup in Russia.

However, he will join up with the Irish squad for moral support ahead of their next qualifier, which is against Austria in Dublin on Sunday, June 11.

The 28-year-old watched the 3-1 friendly loss against Mexico from the MetLife Stadium in New Jersey at home on television in the early hours and says he has long since come to terms with his injury and is now putting his full focus on returning to action – whenever that may be.

“I watched the game last night and I was quite alright with it,” he said. “I was supporting the lads. I got my head around the injuries and obviously it natural you miss the game but you got to change your mindset then and realise that you’re not as part of it as you would like.

“For the Austria game I’m meeting up with the lads a couple of days before and it’ll be great. I can’t wait to be around the hotel. It might be a bit strange being in and around the Aviva changing rooms knowing that I’m not going to be going out there but this is a small setback.”

Cathaoirleach of the County of Donegal, Cllr Terence Slowey, presented the Freedom of the County Award to Coleman and tributes were paid by Chief Executive Seamus Neely and all the represented parties – Ciaran Brogan of Fianna Fáil, Sinn Féin’s Noel Jordan, Martin Harley of Fine Gael and Niamh Kennedy, who represented the Independents.