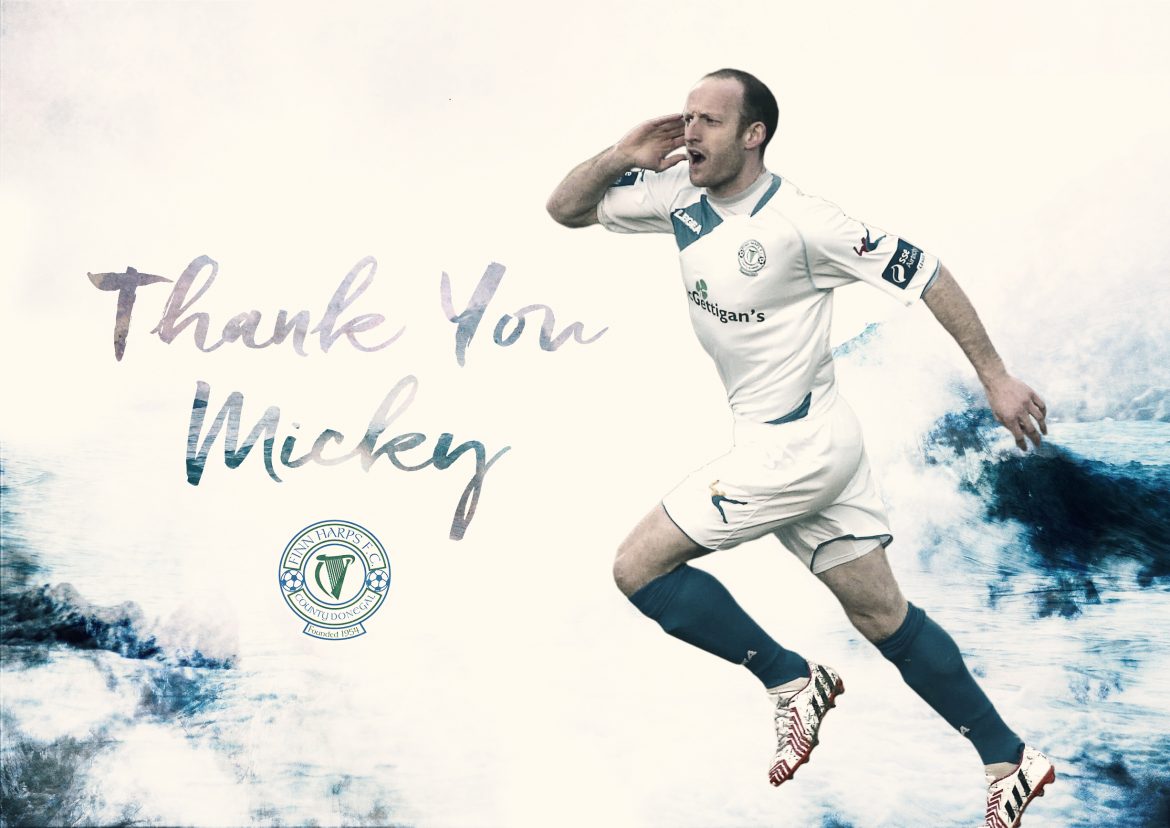 Finn Harps F.C. Chairperson Sean Quinn and manager Ollie Horgan have paid tribute to the great service given to the club by Mickey Funston who made his final appearance as a late sub in Friday night’s Northwest derby against Sligo at the Showgrounds.

The Bonagee man spent 13 seasons with Harps making 335 appearances and scoring 33 goals. The goals included the crucial second against Derry City earlier this season in Buncrana and the first in the promotion play-off against Limerick in Ballybofey in November 2015.

Mickey Funston made his debut in a 2-0 win over Dundalk on May 29th 2004 just two weeks after his 19th birthday.

Finn Harps manager Ollie Horgan praised Funston’s commitment to the team both on and off the field.

“I am only here for part of the time that Mickey played for Harps but he gave me total backing personally, and as a member of the management team over the past four years. On and off the field he bought into what I was trying to do and during difficult times last season he backed me to the hilt.

“He deserves great credit for that. On the field there was no player more committed than Mickey and the reality is that we might not be in Premier Division right now if he hadn’t scored that first goal against Limerick in the play-off two years ago.

“Yes B.J. Banda got the winner but it was Mickey that got us the equalizer to force extra-time that night against Limerick. His energy levels even at training was a great example to young players coming into the club. We will certainly miss his presence on the field and in the dressing room.

“Personally and on behalf of the players and management team I want to wish him well in the future,” Horgan said.

Finn Harps Chairperson Sean Quinn said the departure of the Bonagee man is a huge loss to the club.

“I would like to take the opportunity to thank Mickey Funston for the fantastic service he has given to the club over the past 13 years.

“He is one of the most committed players that we have ever had at Harps. Apart from his short time at Dungannon Swifts, Mickey has stuck with us through the ups and downs of League of Ireland football.

“On behalf of Finn Harps I just want to wish Mickey well in the future and hopefully he stays in the game in some capacity because I have no doubt that he can have a big influence on developing the careers of young players” Mr Quinn concluded.