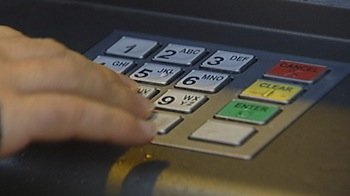 A young woman has revealed how her ATM card was hacked and £580 illegally spent in Marks and Spencer.

Holly Ní Mhuirí was left shocked after her ATM card was hacked in Letterkenny and used to shop for the groceries and other items online.

Holly was contacted by her the fraud section of her bank, Ulster Bank, and her card was cancelled immediately.

Holly has posted a message on Facebook warning banklink users not to use the ATM at the front of the Letterkenny Shopping Centre.

Several ATMs have been hacked in various ways in recent months.

Some people have been the victim’s of ‘shoulder surfers’ where their ATM pin numbers are taken down by strangers and then used on blank cards.

In other cases, details of bank cards are gleaned using false ATM fronts and then used to buy products.

Gardai have appealed to anybody who notices anything suspicious at ATM machines to contact them immediately.