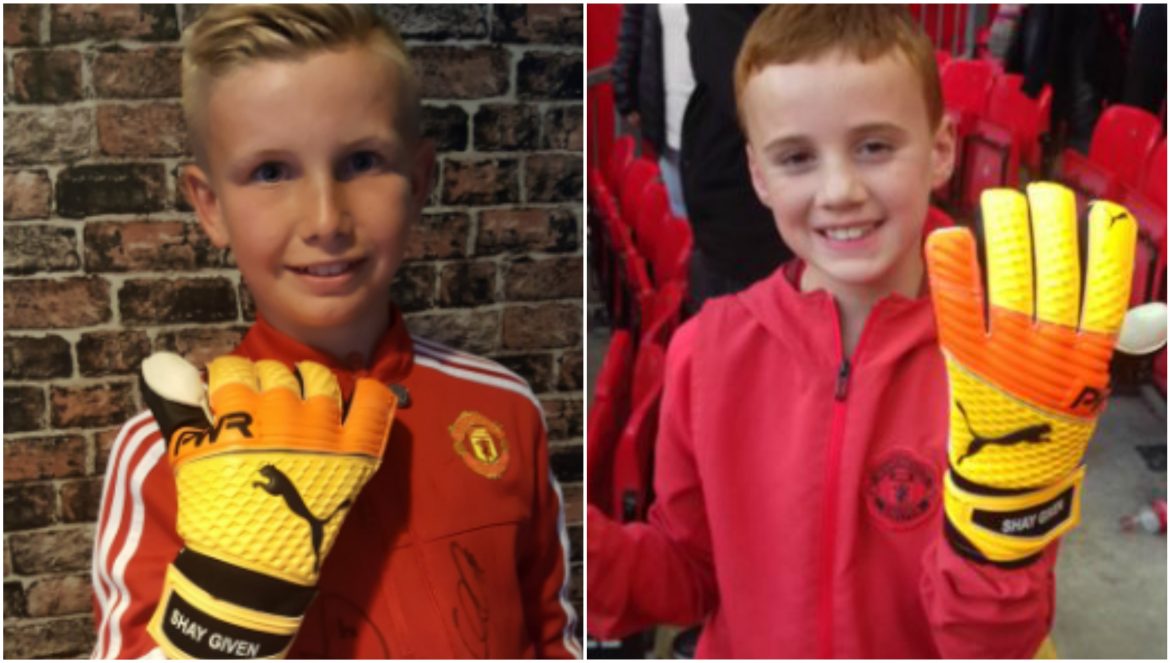 Shay Given made two of his biggest fans’ dreams come true when he gave them each a very special souvenir following the Michael Carrick’s Testimonial at Old Trafford in Manchester on Sunday last.

A patron of Macmillan Cancer and Beechwood Cancer Care, former Republic of Ireland and Stoke City goalkeeper Given has always taken the time to meet his fans and sign autographs.

Jack Murtagh (8) and Gwion Parry (12) were over the moon when the Lifford native presented them each with one of his goalkeeping gloves.

The huge size nine Puma gloves were worn by Given throughout the match, and were used to make an extraordinary save when Louis Saha attempted to get the ball past Given during the second half.

When the game ended, Jack and his father Brian made their way towards the barrier to try and catch a glimpse of Jack’s favourite goalie. Much to their delight, when Brian called out to Shay as he made his way into the dressing room, he turned back and greeted Jack, Brian, Gwion and David.

Speaking to Donegal Daily, Jack’s father Brian explains how they had specifically purchased tickets close to the tunnel at the Streford end of Old Trafford in the hopes of getting autographs and photographs before or after the game.

“Jack is a massive Manchester United fan and even bigger Republic of Ireland fan. We have been to Old Trafford three times this season, and four times to the Aviva Stadium to watch Ireland play.

When the game finished, the players began making their way down the tunnel in twos and threes. As Jack and Brian were right beside the tunnel, they feared they were out of luck when the players couldn’t hear them trying to get their attention.

In a stroke of extraordinary luck, Brian explains how when Given was making his way down the middle of the tunnel, Given heard Brian’s calls.

“As Shay Given was walking down the middle of the tunnel I called him as loud as I could, not sure if he heard my Irish accent or not, but he turned over and handed a glove each to Jack and another boy who were absolutely star stuck and gob smacked.”

Jack couldn’t believe his luck when Shay Given presented him with one of his gloves. Image: Brian Murtagh

Given and several of his teammates greeted their fans, much to Jack and Gwion’s delight. Brian says “he was absolutely over the moon and it really made his day.”

The other lucky recipient of one of Shay’s gloves was 12-year-old Gwion Parry. Gwion, his dad David, and brother Cian made their way up to Manchester from Caernarfon in North Wales.

David says that he was very grateful by how enthusiastic the footballers were with their younger fans in particular. He says “Gwion and Cian received many autographs, but the highlight of the day was when Shay Given was walking to the dressing rooms at full time – he came over and gave Gwion one of the gloves he had actually wore during that game!” 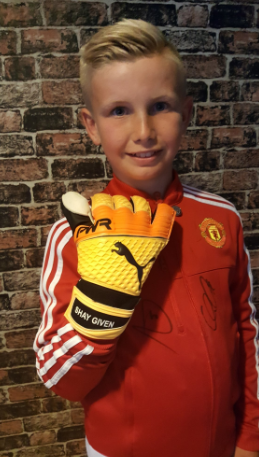 “Gwion was one happy lad coming away from Old Trafford!”

Edwin van der Sar signed jerseys for Jack and many of his other fans, and John Terry gave his Captain’s armband to another child. Jack was even lucky enough to catch former Manchester United winger Quinton Fortune who was doing some commentary work for a television station! 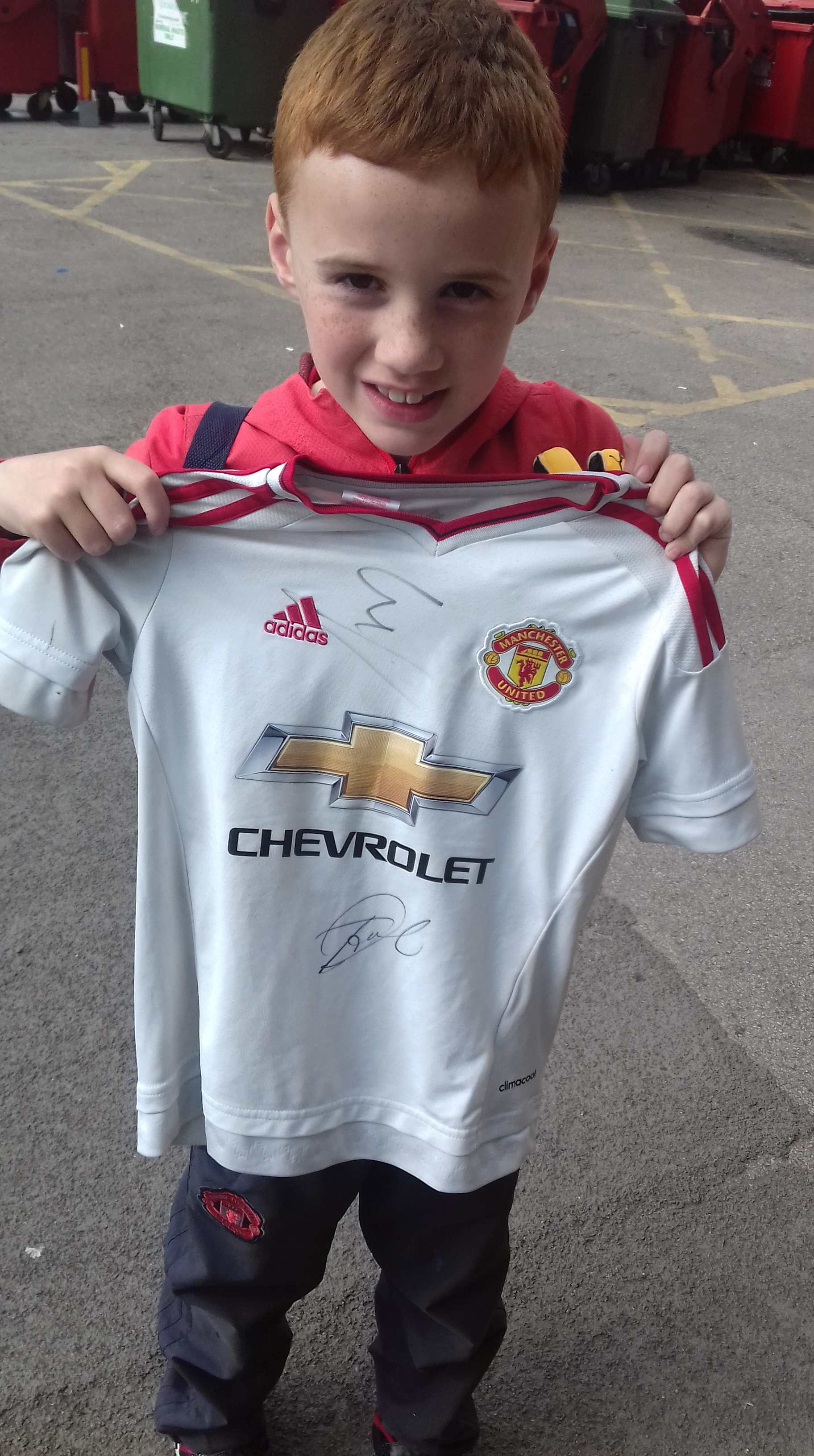 Jack was thrilled with his signed jersey. Image: Brian Murtagh

Once Jack received his glove, he put it in his jacket and held it close until he left the stadium. As they made their way into the city center, Jack was proud to show everybody his special keepsake from his favourite goalkeeper.

Even in the airport on the way back to their home in Dublin, he was still proudly showing off his marvelous gift.

Ethan did not accompany Jack and Brian to the match as he supports Liverpool, however when he saw that the Irish trio of Given, Keane, and Duff were named in the squad he wanted to join – however due to the Manchester One Love concert the flight tickets were too expensive. Ethan could not believe his little brother’s luck, and hopes to meet Given himself one day.

Gwion’s dad added that although it may have felt like a small gesture on Shay’s part; it is a moment that Gwion will always cherish. 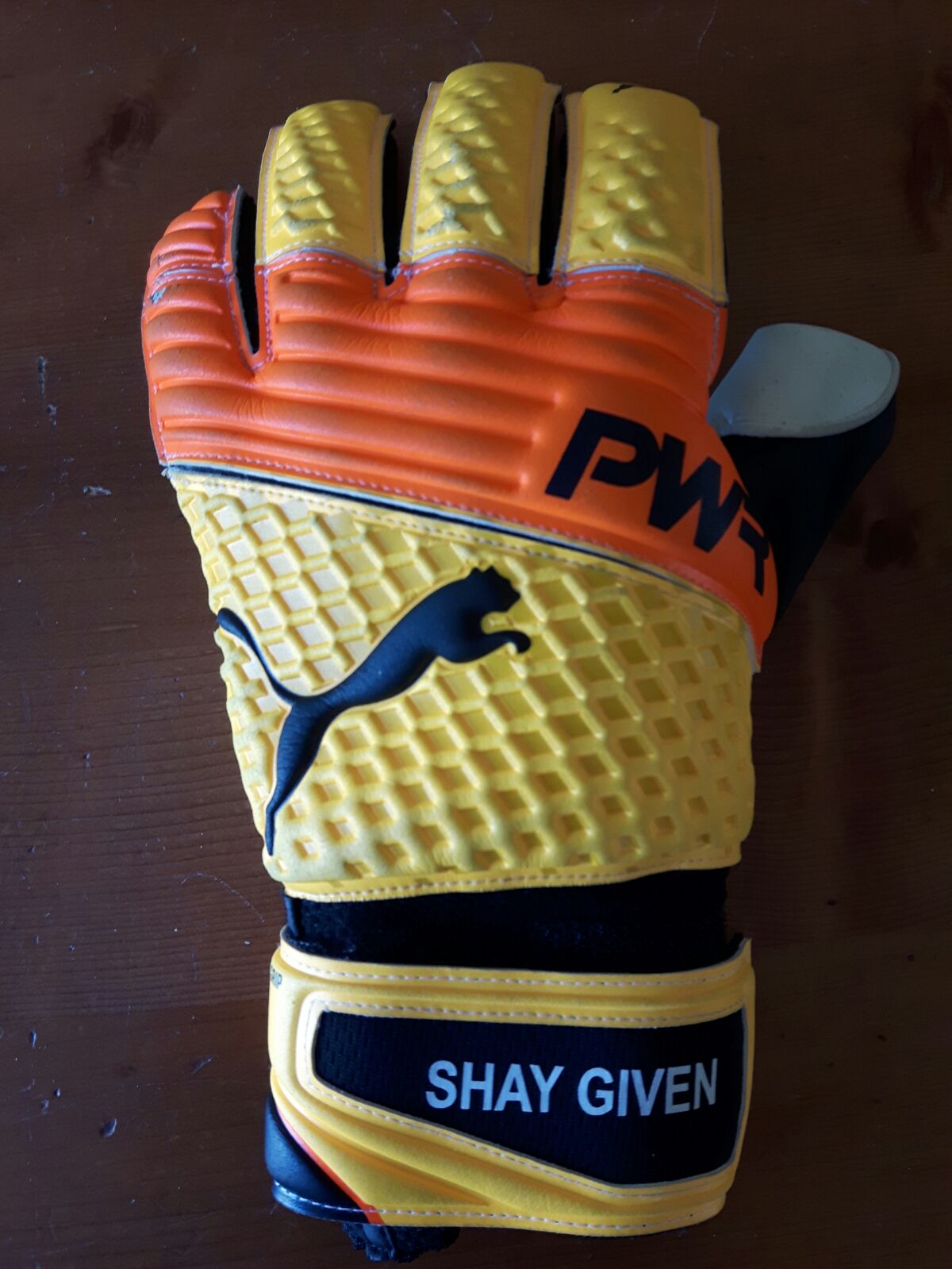 “Maybe it was nothing for Shay to make that gesture, but Gwion will remember it for life.”

Brian explains that Jack feels the same, saying that “it was a special day that he will never ever forget.”

As Brian was tucking Jack into bed on the night they came home, a sense of worry washed over him as he asked Jack where he left the glove. Thankfully the glove was being kept very safe. Adorably, Jack was still wearing the glove in bed!

Both Gwion and Jack plan to frame their gloves and will display them proudly on their bedroom walls.