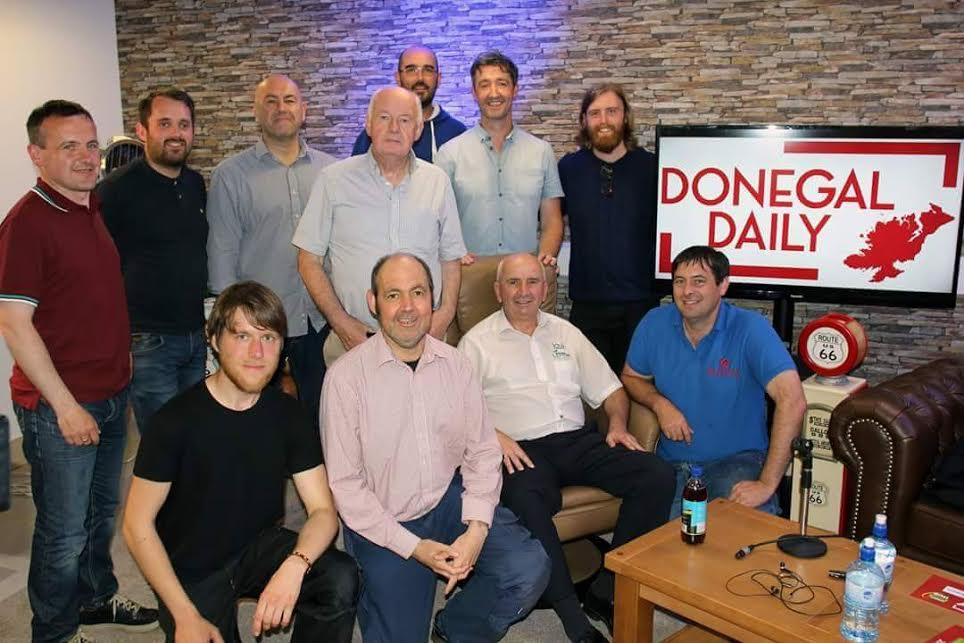 Donegal Daily’s exclusive live coverage of the 2017 Joule Donegal International Rally has been a huge hit and been viewed almost half a million times.

The coverage, in partnership with the Donegal Motor Club, consisted of 25 hours of live footage across the entire weekend, and was the first time a project like this has been rolled out.

Picture caption: Some of the crew at the Donegal Daily TV studio at TFS, Letterkenny.

Between the Facebook Live videos and the YouTube stream, the number of views to the coverage on Donegal Daily TV has gone beyond 480,000.

“The reaction to the coverage has just been phenomenal,” said Donegal Daily Sports Editor Chris McNulty.

“There have been messages coming in from all over the world and we have to thank each and every person who logged in to watch what will go down as one of the classic Donegal Rallies in memory.

“The whole team worked around the clock for the entire weekend and helped make it an unbelievable success.”

The coverage was looked after by Maguire Media, who have worked on broadcast productions for Sky TV, RTE, TV3,TG4 and TVE Spain as well as working on producing sporting events for Sky Sports in the past.

They were supported by Theo O’Grady who has been vision mixer and one of the producers of the Late Late Show for over 15 years.

Charlie Collins anchored the entire 25 hours of the coverage while Chris McNulty and Toni Kelly provided the stage and service reports as well as the on-scene interviews with competitors and officials.

Chris added: “I grew up during a fantastic era of rallying in Donegal and watched the likes of Cullen, Nesbitt, Fisher, McHale and Donnelly at their best.

“Getting the chance now to work closely in the event has been brilliant and to be a part of such superb sporting theatre was fantastic. Toni has been lucky enough to get to compete in the event but this was probably the next best thing! It was great to have such a knowledgable and passionate team on board with us.”

Manus Kelly and Donall Barrett won the International event while Damien Gallagher and Mac Walsh took the honours in the national rally after three gripping days of excitement.

Chris said: “The competitors and officials were very accommodating all weekend to us and very giving of their time – without them the coverage wouldn’t have been half the success it was.

“We have so many people to thank, but in particular we have to say a huge thanks to all of our stage and service sponsors, without whom this project wouldn’t have been possible.

“Manus Kelly allowed us the run of his business premises at TFS on the Ramelton Road since Thursday evening and Aidan Cannon was such a help to the team all weekend. Manus’s cafe, Uptown Cafe, kept the team fuelled up and McDaid’s Football Special kept us hydrated.

“Finally, to Donegal Daily Editor Stephen Maguire and Donegal Daily Commercial Director John Gildea for having the foresight to proceed with what was undoubtedly an ambitious project, but one that has been a rip-roaring success.”

You can view any of the videos on www.facebook.com/donegaldaily or https://www.youtube.com/channel/UCNshVIWIHtdVg_ORdaqyXwg