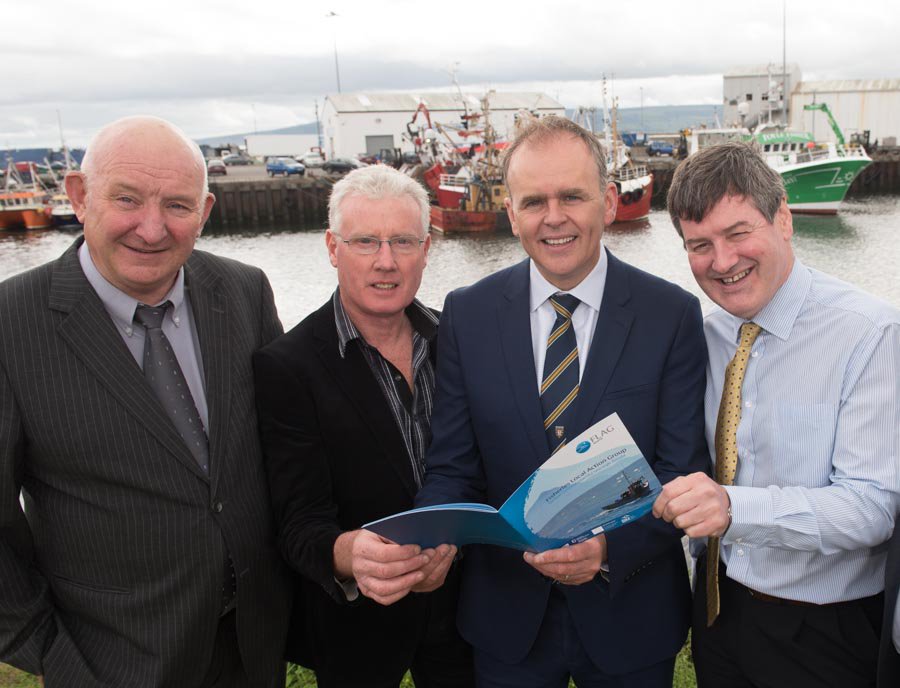 EU Investment Fund to deliver 31 projects in Donegal worth almost €500,000!

The fund will deliver €468,000 in investment across 31 distinctive marine projects for the region.

The North FLAG covering Donegal, is one of 7 FLAG regions from Ireland’s coastline that will benefit from the FLAG scheme, administered by BIM, Ireland’s Seafood Development Agency, which is co-funded by the Exchequer and the EU under Ireland’s European Maritime and Fisheries Fund (EMFF) Operational Programme 2014-2020.

Over the duration of the EMFF programme, the national FLAG scheme will deliver €12 million in funding to Ireland’s coastal communities.

Speaking at the North FLAG launch which also hosts the two day Laurentic Conference which explores the dynamics of sustaining coastal communities part funded under the FLAG programme;

Minister Joe Mc Hugh T.D. said; “I am delighted to be here today in the impressive surroundings of the Maritime Museum in Greencastle to launch 31 projects on behalf of the North Fisheries Local Action Group that will deliver €468,000 to this region.

“The 31 projects announced today follow the national announcement by my colleague and Minister for Agriculture, Food and the Marine Michael Creed of 153 projects that will deliver €3.6 million in investment to all 7 FLAG regions around the coast.

“This is good news for Donegal and an opportunity to build on our marine heritage with innovative projects that will enhance our seafood and marine tourism sectors to enable this community to diversify and grow in the years ahead.”

The primary role of the North FLAG Strategy in association with the overall FLAG programme is to rejuvenate Donegal coastal communities, foster enterprise, innovation, creativity and social inclusion in the continued development of the Fisheries, Seafood and Marine sectors.

Ultimately, aiming for increased job creation, social inclusion and all round protection and improvement of coastal communities throughout Donegal.

BIM’s CEO Jim O’Toole added; “BIM has worked closely with the North FLAG to provide assistance and training where required, to enable the members to develop and implement a strategy that is tailored to the specific needs of the region.

“Donegal is a well-established and resourceful fishing community and the announcement of such a diverse range of projects today by Minister McHugh highlights the value of seafood and the wider marine sector to the county.

“The Board of the North FLAG led by their Chair Jerry Gallagher must be complimented for their unwavering dedication and commitment to deliver this important programme for Donegal.”

The unique features and characteristic of the North FLAG in terms of Donegal’s dedicated and distinctive fishing and coastal communities, its islands and Gaeltacht region, Wild Atlantic Way Coastline were to the fore in all FLAG applications.

Three projects which have been approved by the North FLAG for support and highlight the core ethos of the scheme are as follows:

Bia Mara Teo a family business based in Burtonport on the Wild Atlantic Way where high quality seafood including crab and cooked Whelks will be processed in a state of the art production facility, thus creating employment locally, and developing a superior seafood product from the local waters and bringing it to market in the North FLAG region and further afield.

Bia Mara Teo brings the traditions of a family fishing business, to the latest high quality seafood processing along with business acumen to bring the best seafood products to the shop shelf while creating much needed local employment into the future.

Greencastle Maritime Summer Camp is the perfect example of a North FLAG project which is bringing maritime heritage and the community together to showcase traditions of the sea to future generations of children both from a community social inclusion perspective and visitors to Greencastle and the Inishowen region.

Operated by the Greencastle community centre, children from 4 – 8 years of age and 9 – 13 years can avail of Maritime arts and crafts programmes, seashore safaris and tours of the local Maritime Museum all of which of which are fun, engaging and above all educational.

Greencastle Beach Chair is another excellent example of social inclusion in the community, fishing and maritime industries creating inclusion for persons with disabilities in the sector. It showcases a purpose built pontoon in the harbour area of the traditional fishing village of Greencastle which incorporates a hoist whereby persons with disabilities can easily access fishing vessels and other seafaring vessels.

The Chairman of the North FLAG, Jerry Gallagher said; “It is a privilege to be part of this process which delivers much needed funding to rural coastal communities and targets areas of the coastline which have suffered a decline in recent years.

“This EU supported initiative is designed to support and strengthen communities where fishing and aquaculture contribute to the local economy and more importantly the local network which is so important in sustaining communities.

“The North FLAG board is made up of people from various sectors of Donegal’s coastal communities, who volunteer their time, and carry out their brief in conjunction with a FLAG strategy for our North FLAG Region.

“The strategy takes into consideration all the issues which were highlighted during a public consultation. The North FLAG has supported a range of diverse projects in this round of funding and our members will continue to develop this programme to the benefit of the North FLAG region” Gallagher concluded.