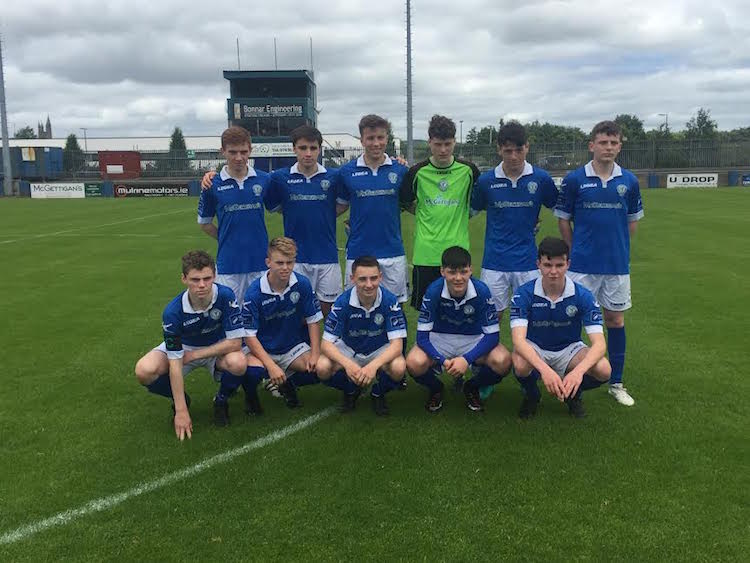 It was a case of two points dropped for the Finn Harps Under-17s this afternoon as they were held to a draw by Athlone Town at Finn Park.

Jamie Brown’s early goal raised the optimism, but Callum McKelvey cancelled it out and Harps couldn’t get ahead again despite being in control of things for the most part.

Harps hit the front after just six minutes when Brown brilliantly steered into the bottom corner from 15 yards after being picked out by Marc Walsh’s low cross.

Walsh was lining out for the final time in Harps colours before he heads off to start his adventure with Swansea City next week and there were some wonderful flashes here from the former Gweedore Celtic schoolboy.

Walsh, on one occasion, manoeuvred his way past four Athlone players only for Athlone goalkeeper, Jamie Lunt, to thwart him at the vital moment.

Soon after, Walsh, again after jinking past a couple of challenges, was denied by Lunt, who did well to save Darragh Ellison’s rebounded effort from a narrow angle.

By that stage, Athlone were level, though, as Callum McKelvey capitalised on poor defending from Harps to steer home an equaliser. For a Harps side that has prided itself on its defensive form so far, it was a poor goal for them to pass up.

But they might well have taken the lead only for Corrie Lee Bogan’s drive from outside the box to fly wide and Bogan forced Lunt into action with a swerving free-kick that the Athlone netminder had to claw to safety.

Harps should have taken the lead early in the second half when, from an inviting cross by Brown, Niall McGinley shot at Lunt.

Brown twice went close, firing just over with one sizzling attempt while Lunt parried away from a deflected Bogan shot as Harps went in search of a winner.

A Ryan Cunningham curler was too close to Lunt in the dying embers and Harps had to settle for a share of the spoils.