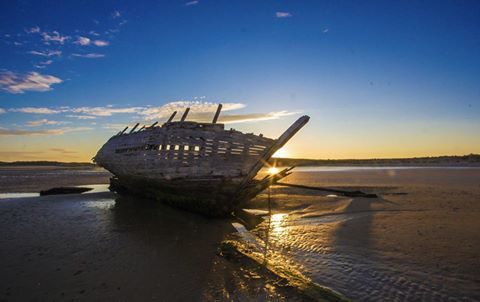 Another chance to see documentary on iconic Bád Eddie tonight

The story behind one of Donegal most famous shipwrecks is to be explored once more on television tonight.

A repeat showing of the intriguing documentary Bád Eddie airs at 8.30pm tonight (Wednesday) on TG4.

Bád Eddie shares the tale of how Cara na Mara (Friend of the Sea) was towed into Magheraclogher Beach in Gweedore, Co Donegal in 1977.

She was a large fishing boat and was on the beach as she needed two planks repaired.

Fast forward to 2017 and the boat is still sitting on the beach, better known now as ‘Bád Eddie’.

Since 1977, she was in the video ‘In a Lifetime’ by Clannad and BONO, she appeared in VOGUE magazine and she inspired Michael Moore to finish his book ‘Dude Where’s my Country’ while he looked out at her beauty. In the 70’s for the local children in the area however she was their playpark, a place where they were pirates aboard their own ship.

She is a huge attraction for people seeking a photo of the iconic structure, with many stunning captures taken from all angles and all times of day, even during stunning shows of the Northern Lights.

The story of the famous shipwreck on the beach in Donegal is told by Producer and Director Sonia Nic Giolla Easbuig  with interviews, footage (old & new), personal stories and photos of the boat.

‘Bád Eddie’s’ story is told by those living closest to her, the fishermen who remember her at sea along the Gweedore coastline, the man who repaired her when she broke down are all intercut with beautiful archive and stunning pictures. The documentary ‘Bád Eddie’ tells for the first time the story of ‘Bád Eddie’ from 1970 to the present day.