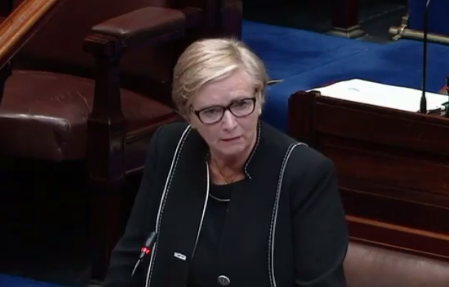 Donegal Deputy Pearse Doherty has today questioned An Tánaiste Frances Fitzgerald about the extraordinary delays at the Breast Centre at Letterkenny University Hospital.

Shocking figures were disclosed to Donegal Deputy Pearse Doherty this week showing that, of the 732 patients referred to the breast cancer clinic by their GP, 143 of those have been waiting for over a year for an appointment.

“How does the government stand over the fact that women in Donegal, 143 of them who have been referred by their GPs to the systematic breast disease clinic have been waiting over a year for appointments, where yet another couple of hundred women have been waiting six months?”

Deputy Doherty put the query to an Tánaiste: “as a woman, and as Tánaiste, and as somebody who has a leadership role in this Government of this State, what action can you as a Government take to make sure these women are not waiting those extraordinary lengths of time for an appointment to a breast clinic after being referred by their GPs by presenting symptoms or possible symptoms that they have breast cancer.”

The Tánaiste said she recognised the importance of timely access to Breast Check, and stated she was not familiar with the current issues in Donegal.

Ms Fitzgerald said: “There is a system in place that if there is an urgent referral that arrangements can be made that the person is seen quickly as opposed to the more routine referrals.

“I don’t know the particular situation in Donegal, but sometimes when there have been delays in Breast Check it has been due to the lack of availability of staff, of radiologists.

“I will ask the Minister the precise reason why there are those delays in Donegal and I will ask him to come back to you and give you the details because it is a serious issue.”