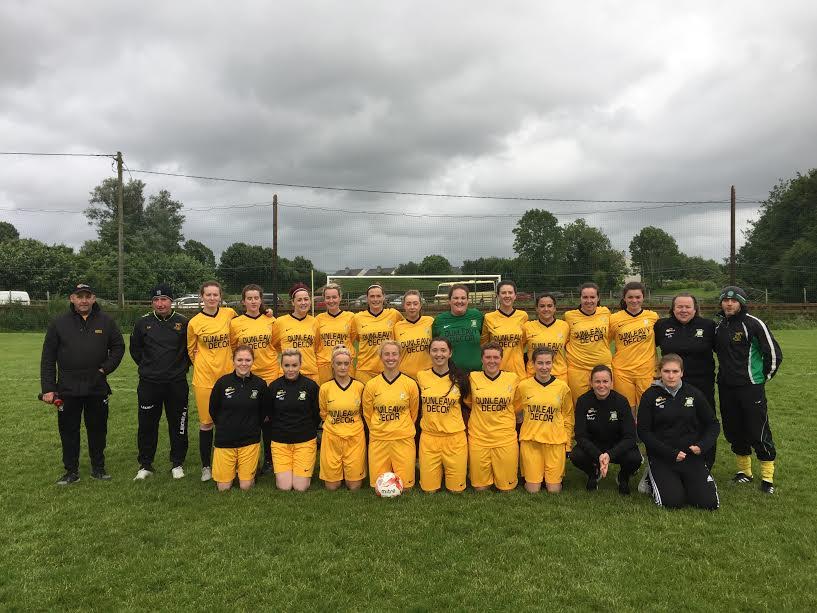 Illies Celtic opened up a seven-point lead at the top of the North West Women’s Super League on Thursday night thanks to a 6-0 win over Greencastle FC with Paula McGrory hitting four goals.

Lagan and Bonagee shared the honours, Rasheney won away to Clonmany and Swilly Rovers secured their first win of the season at home to Carndonagh.

Bonagee United (pictured above) twice came from a goal behind to draw with old rivals Lagan at Orchard Park in a game that could have swung either way.

Lagan’s Amy Boyd and Nadine Crawford had goals cancelled out by Denise McElhinney and Grainne Gallagher for Bonagee, who might well have sneaked the win by the end of a contest played in a fierce and frustrating wind in Manor.

Lagan began brightly and Boyd put them in front after just 16 minutes. Bonagee didn’t deal properly with a ball in behind and Boyd pounced to score.

Bonagee’s Brenda Sweeney drilled into the hands of the returned Deirdre McDaid before Denise Gallagher made a fine save to deny Spaniard Paula Vales at the other end.

Bonagee were a renewed side after the break and, playing in the striker’s role for this clash, McElhinney scored a delightful equaliser six minutes into the new half. McElhinney sent a peach of a free-kick sailing all the way to the Lagan net.

Anna Doherty went close just after the re-start. After latching onto a through ball from Siobhan Sweeney, Doherty’s shot nicked off McDaid and rolled wide.

Lagan edged ahead just after the hour mark as Crawford punished slack Bonagee defending to score.

Bonagee, though, hit back. McElhinney smashed against the outside of the post with a blistering effort but, 14 minutes from time, the Dry Arch side were level again.

Chantelle Grant was making her first competitive appearance since a cruciate injury sustained at the start of the summer of 2016. And it was from her corner that Gallagher steered in at the near post to secure a share of the spoils.

Illies continued their relentless pursuit of silverware thanks to a heavy battering of Greencastle on Thursday.

The red-hot Paula McGrory bagged another four goals to take her tally for the season to 16.

McGrory headed home an Alison McGonigle corner to open the scoring. McGrory got on the end of passes from Kirsty Grant to secure her hat-trick.

McGonigle got in on the act when she fired home from 25 yards out with a  cracking strike.

McGrory has been the on-song player of the season and she had time for a fourth while Tessie Coyle’s free-kick also made its way all the way through the Greencastle defence and creeping into the bottom corner.

The damage would have been greater still only for Danielle Houghton, the Greencastle goalkeeper, saving an Illies penalty.

Rasheney picked up three away points with a victory in an Inishowen derby at Clonmany Shamrocks on Thursday night.

Ciara Duffy and Georgina Gordon netted the goals for the Trawbreaga women as they picked up the useful and morale-boosting win.

Swilly Rovers picked up their first win since making a return to senior ladies football on Thursday night in Ramelton.

It proved a historic night of sorts by the Lennon.

Noelle McMenamin, Heather Dougherty, Danielle Hand and Kellyann Buchanan were all on target for Swilly as they secured a win.