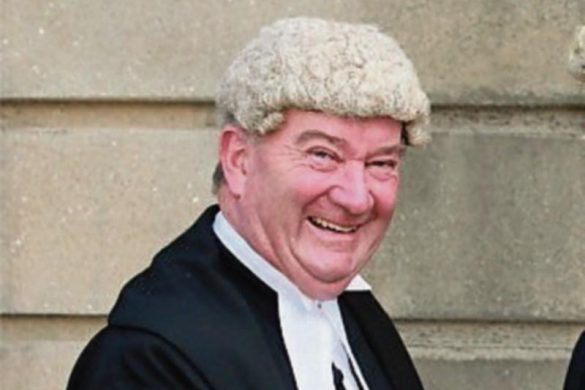 Judge O’Hagan, a native of County Louth, has been Circuit Court Judge for the Northern Territory for 11 years, but is now to retire.

“He has served the people of Donegal, without fear, favour, bias or ill will,” Judge Kelly said.

“I am quite sure where we erred, John corrected us or where we were unduly harsh he extended the hand of mercy.

“He dealt with them with fairness, humour, compassion and, always, dignity.

“Legal expertise, life experience, common sense, practicality, firmness, decisiveness, empathy, hard work and good honour are the qualities of a good Judge. He will be missed by all the legal community.”

Judge Kelly said he first met Judge O’Hagan in April 2011 and described his colleague as a ‘genial, smiling and friendly man’.

Judge Kelly said Judge O’Hagan should as if he was on a lap of honour ‘like aTaoiseach, who announced his retirement but did not give a date!’

Judge Kelly commended Judge O’Hagan on how he dealt with ‘issues of overcrowding, long lists, late sittings and harrowing cases’ and wished him well now in his motorcycling, caravanning, sailing and time with his family.

She said: “He has always been most helpful and insightful when we sought advice. The pressure of the list and the volume of business is considerable but he isn’t afraid of long hours and extra days. Int is a magnificent tribe that arrears are much reduced.”

Mr Damien Crawford BL, on behalf of the Bar, said it was a ‘turning of an era’.

“Not only are we about to change judge, but we are about to leave this building to go to a new building,” he said.

“I remember when we were here with a stone floor and with acoustics that no-one could hear. Myself and Mr (Peter) Nolan (BL) remember those days and the odd rodent – and that was only his clients!

“Judge O’Hagan has done more than a service to Donegal and has been an essential feature of the management of the people of the area.

“The amount of energy that is expended, I don’t think people actually appreciate it. Practitioners were below yesterday bushed, but Judge O’Hagan death with the cumulative work of all of the cases. He has shown tremendous dedication to the public service and will be greatly missed. We are losing one of the best judges ever on this circuit. You might have worn out this building but you’ll never wear out your welcome.”

Judge O’Hagan has compiled a photo montage to adorn the new courthouse on the High Road in Letterkenny.

The outgoing Judge paid tribute the legal personnel, the courts staff, the Gardai, probation service, prison officers and the press.

He paid particular thanks to his colleagues Judge Kilraine and Judge Kelly.

He said: “A lot of people don’t realise the hard work the District Court does. It is the first port of call for the ordinary citizen on the street. It is the first experience that the citizen has of court. It is a tremendous court of common sense. I often say that the District Court and Circuit Court are the peoples’ courts. They are for the people and for the citizens.

“I hope  that we have sent various messages to the community that there are certain things that you just don’t do.”