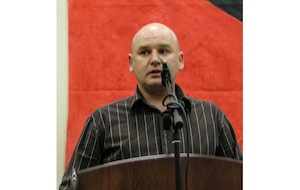 Independent Councillor Micheál Choilm Mac Giolla Easbuig has called on the remaining charges of false imprisonment of the former Tanaiste Joan Burton at a Jobstown protest to be dropped.

The west Donegal councillor believes the cases are “politically motivated to criminalise protest” and that the remaining cases should be dropped in light of acquittals of six protesters in which three were public representatives.

“The vast majority of people are of the opinion that there was no false imprisonment, and that these charges are a case of the establishment hitting back against a very successful anti water charges campaign.

“It’s a total waste of tax payers money to further pursue charges against other defendants on similar charges.

Mac Giolla Easpuig went on to express his delight at the news of acquittals of the six defendants yesterday.

He added “questions need to be asked as to why these people were even brought to court in the first place.”

The news of the not guilty verdict was welcomed by Right2Water Donegal, with chairperson Charlie Mc Dyer saying; “This trial underlines how desperate the state were to send out a message those who are prepared to protest against austerity that their resistance won’t be tolerated.”