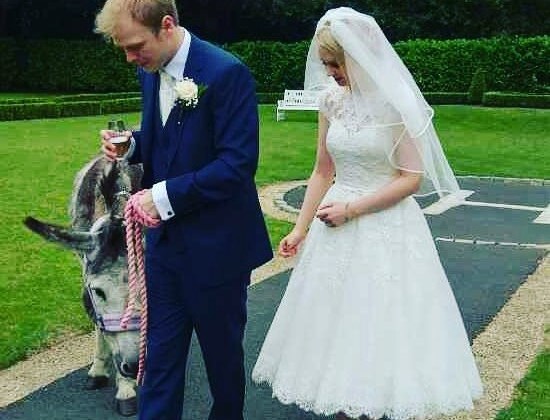 Did you hear about the Donegal donkey who turned up a wedding?

This day last week was a big day for Quiney the donkey from the Donegal Donkey Sanctuary as he attended a very special occasion.

On Monday, June 26th, Quiney was invited to a luxurious castle hotel in Dublin to greet guests at the wedding of Meath-based couple Maegan Wallace and Brian Connolly.

Bride Maegan has a huge love of donkeys and is a proud supporter of the Donegal Donkey Sanctuary in Raphoe, so it was fitting for her love Brian to arrange this special gift for her. 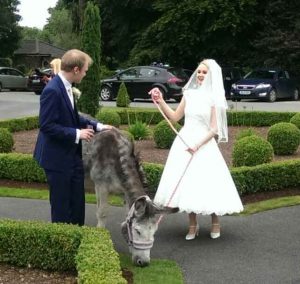 Maegan Wallace and Brian Connolly, with Quiney the donkey on their wedding day

Quiney’s guide Danny Curran helped him get suited for the occasion in pastel pink and purple – to match the wedding colour theme, of course.

They stopped off at The Happy Camper Cafe in Glenveagh for breakfast before the long journey to the capital.

On arrival, Quiney happily posed for photos with the newlyweds after their wedding ceremony at Finnstown Castle Hotel near Lucan in Dublin.

Guests were not expecting the four-legged visitor, but Maegan knew he would be arriving and his visit was a clear highlight for her on her big day. 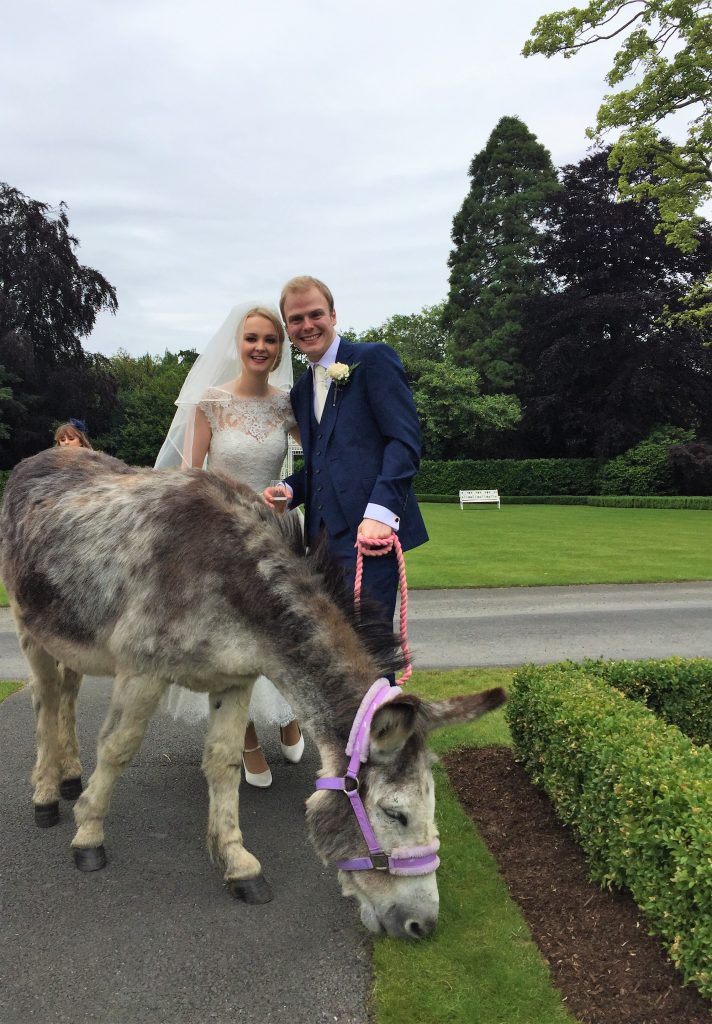 Maegan tells Donegal Woman: “I was too excited about the donkey to be thinking about what anyone else thought of it!

“The flower girls were over rubbing the donkey, the children, myself and Brian and my Nana all got a chance to pet him,” she said.

Quiney was a big talking point among the guests, Maegan said.

“It was a good icebreaker for everyone who didn’t know each other.”

Quiney was not phased by all the attention and quietly grazed while Maegan walked him around the grounds. Maegan said he was so good and gentle that she had no fears about getting her beautiful white dress dirty. 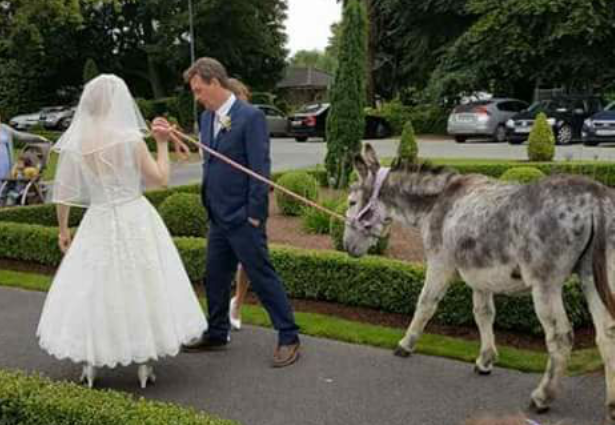 Having a donkey at their wedding was always the dream for Maegan, her husband, Dublin man Brian told Donegal Woman.

“Maegan is mad about donkeys, she absolutely adores them. She always said when we were looking at venues – ‘I’d love if a donkey could come.’

“When we were shown around hotels and grounds we always asked – ‘On the off chance, if we were able to bring donkeys, could you allow it?,” Brian said.

Brian rang Donegal Donkey Sanctuary owner Danny Curran about his fiancee’s wishes and Danny was only too happy to oblige.

“The only place I wanted to give any money to is the Donegal Donkey Sanctuary, so I rang to see if we could work out how much it would cost to bring one down to Dublin.”

“Danny said to me: ‘It sounds a bit mad but I love mad things.’” Brian recalls, “it couldn’t have worked out better and they couldn’t have been nicer. We were able to drum up some fundraising from our kind guests.” 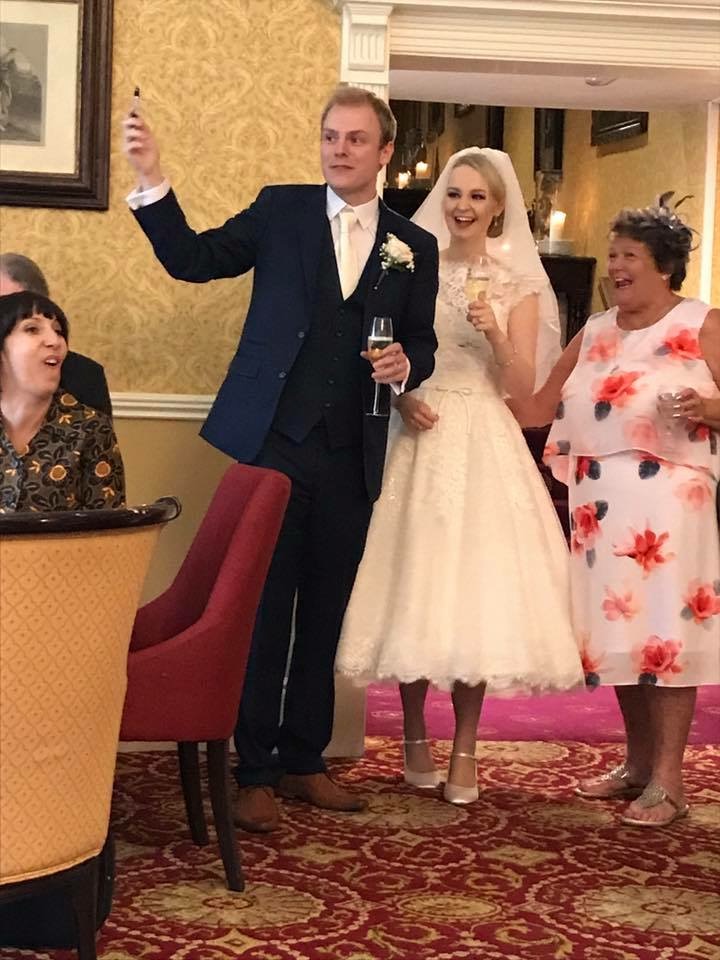 Groom Brian Connolly announcing to guests that there was a donkey outside.

Limerick native Maegan said she had grown up with a love of donkeys.

“I used to go to Thurles to visit my grandparents and I’d visit a donkey named Nedya with my grandpa Eddie. Since then I’ve always loved them,” Maegan said.

Maegan learned about the Donegal Donkey Sanctuary after seeing an appeal on the news at Christmas time years ago. She adopted one donkey then, and thus began her desire to support the charity further.

Maegan now supports the care of four donkeys in Donegal, having adopted two for herself, one for her father on Father’s Day and another for her grandmother’s birthday.

“I always feel with presents, unless you really want something you’re better off giving them to a charity,” she said.

Maegan’s husband Brian’s family are from Donegal, so she has had several chances to visit the sanctuary and meet owners Danny and Sandra Curran. The newlyweds credit the couple as being ever accommodating to their visits.

“Danny showed us around the Donkey Sanctuary on St. Stephen’s Day last year, taking time out of his day to meet us,” Brian said. 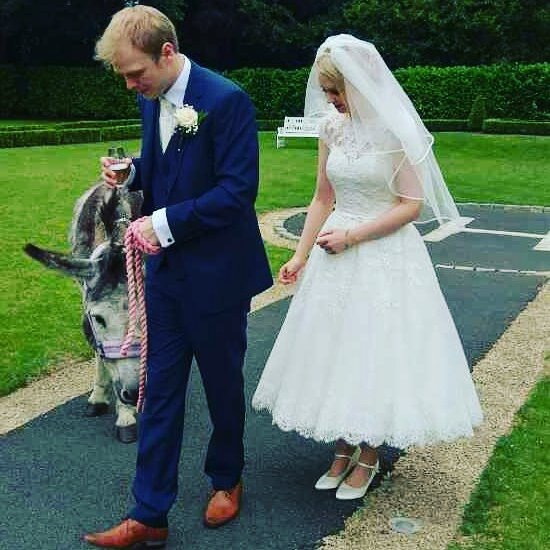 After a most memorable wedding day with a donkey, Maegan and Brian are planning to continue supporting the sanctuary, which has faced several funding crises in the past.

The centre, which opened in 2006, has helped rehabilitate and rehome more than 600 donkeys. It currently cares for 73 donkeys and relies on animal lovers to donate and adopt donkeys to keep it open.

Maegan is just one of many people who have experienced the happiness that the good-natured owners have brought to others by caring for the creatures.

“I’m so pleased, it was such lovely thing for them to do because Donegal is a long way from Dublin. It was a really lovely day. I think more people should have donkeys at their weddings!”, she said.

For more information or to donate to the Donegal Donkey Sanctuary, click here: donegaldonkeysanc.com or visit them on Facebook at www.facebook.com/DonegalDonkeySanctuary

Did you hear about the Donegal donkey who turned up a wedding? was last modified: July 3rd, 2017 by Rachel McLaughlin
FacebookTweetLinkedInPrint
Tags:
donegal donkey sanctuarywedding