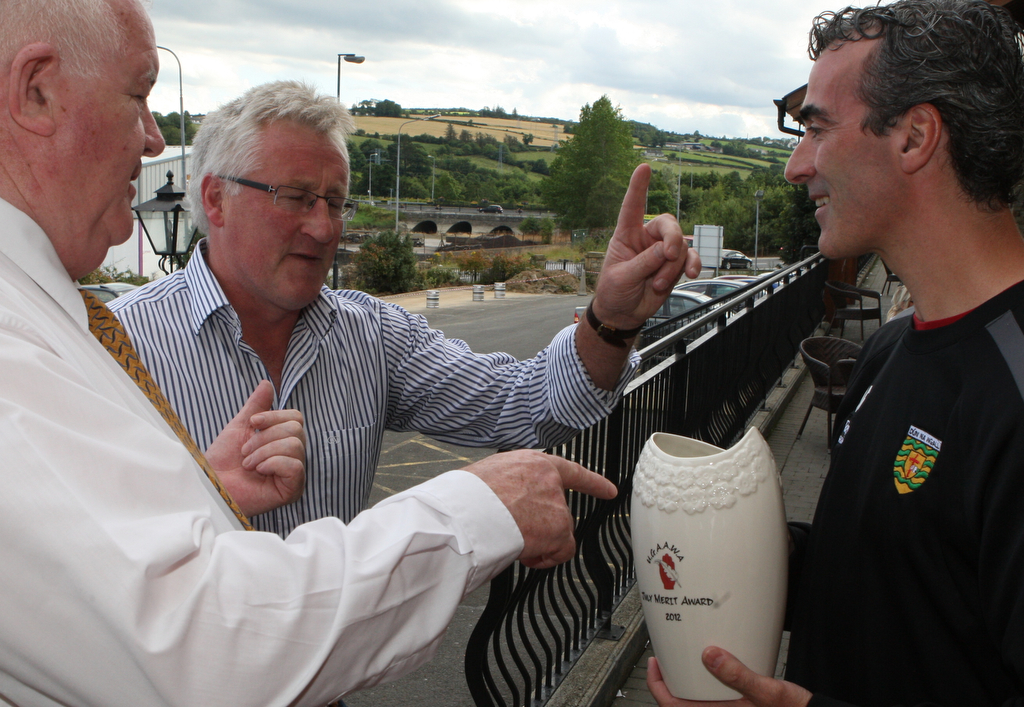 Dr. McGinley was a great doctor, my brother Neilus and I were told at the time as children, while we were recovering from an operation that our procedure should have been done in Sligo, but Dr. Mc Ginley knew us boys and came in and preformed one of his last operations at Letterkenny General Hospital when he removed me and my brother’s tonsils.

Dr. J. P. McGinley was a brilliant surgeon and doctor but wasn’t that good when it came to parking his car! Many’s the time the main artery of Letterkenny would become blocked as the late doctor would pull the nose of his car into a parking place only to leave the rear of the car sticking out in the middle of the road. Dr. McGinley was Dr. Mc Ginley and the town had great respect for him, so if the town came to a stand still in them days and Dr. McGinley was the cause no one said nothing because they never knew when he might be blocking a street in the future coming to their own rescue as their doctor.

My late grandfather Willie Coyle was better at parking his Opel Kadette than our local GP but he also had the art of bringing Letterkenny Main St. to a standstill as he drove at a snail’s pace down through the town as “happy as larry” humming away to himself!

Happy accidents
I started out on my journey to write this column this week on a complete negative about parking and traffic problems in Letterkenny, but I was prompted by a photo that I snapped 5 years ago in 2012 of Jim Mc Guinness, who by complete accident met Jack Spillane in the doorway of the Mt. Errigal Hotel in Letterkenny. The picture quickly made me think, who would you rather be in this photo, the one that is always giving out and pointing out your faults or the one who takes the best out of you and gives you results.

Growing up in Letterkenny I always believed that my late mother Mary Ellen made up the song “Downtown” which she would sing away with joy when she would head off with us all in the pram or hanging on to it from the far out reaches of Wolfe Tone Place which was well out in the country in them days. She headed down to the foot of the town or home as she called it. She would sing the lyrics of the song and we would all call out “Downtown”. That was in the 60s and in the early 70s after my mother passed away I was surprised to hear a girl called Petula Clarke singing my mother’s song on the telly.

One of my other beliefs about Letterkenny was that Lance and Judy Ball came to Letterkenny with the International Folk Festival and liked the place so much that they just stayed on. I remember they had a lovely big English registered Volvo which they would park in the Old Golden Grill Car park on the Port Rd. 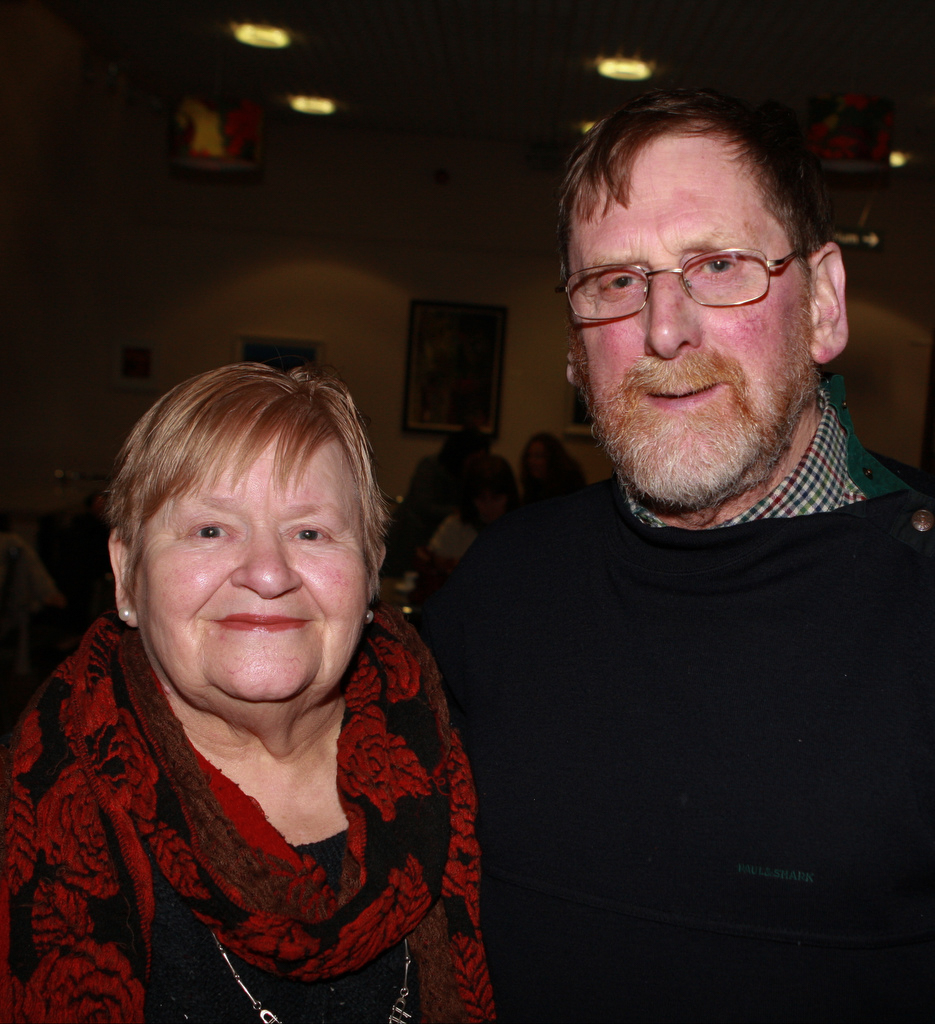 Lance and Judy Ball who have done so much for Letterkenny over the years pictured a couple of years ago at the Stockton’s Wings concert at An Grianan Theatre. Photo Brian McDaid

I remember as a child standing at the Market Square watching people building the stage and seeing Lance and Judy busy getting everyone organised, they even had our rent man Barney Doherty roped in to the Folk Festival. I knew it was him because I could hear his voice which never seem to change as I heard him say “Right You Be” which I heard our rent man say so many times when he would knock at our door in Wolfe Tone Place for the rent which was two pounds and 56 pence which some weeks we would have and others weeks we wouldn’t. 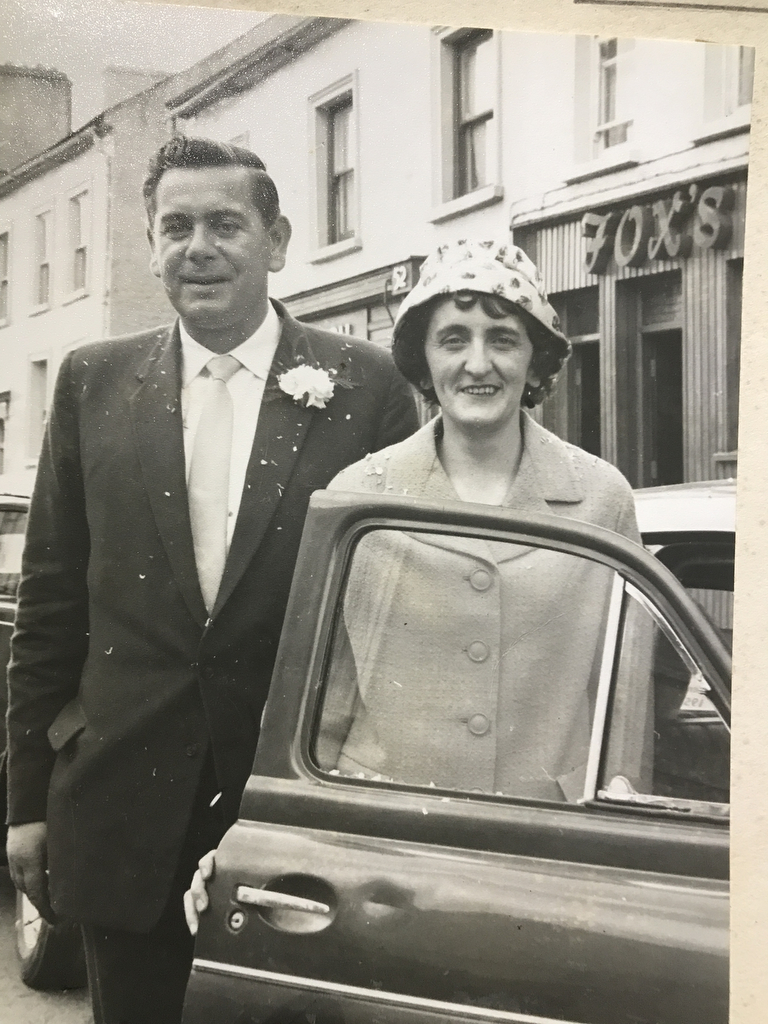 My mum and dad Fred and Mary Ellen pictured downtown on the wedding day as they head into the Central for the wedding breakfast in 1961. Photo by A Kelly, Lr Main St. Letterkenny.

Barney still said “right you be” on both outcomes.

Lance and Judy Ball will turn the key to close the door of their premises at 52 Upper Main Street for the last time this year as they close the door on a piece of history in Letterkenny for the last time. These two people gave so much to Letterkenny over the years in business and in the promotion of Letterkenny, the two could take a bit of credit for bringing Letterkenny Main St. to a standstill over the years as them and festival director, Barney Doherty and all the other committee of the Lettekenny International Folk Festivals drew people from all over the world to the town every summer.

Special mince
Last week local business man Stephen Sheils turned the key for the last time in a retail side of Doherty’s Butchers after a last gasp gallant attempt by relocating to save the business. Doherty’s special mince is what we were rared on in Letterkenny.

The story was once told about someone heading off to England who filled her suitcase with Doherty’s Mince. On arriving in England the customs decided to check her case and on opening it asked her what was that in there? to she replied, ah that’s special! 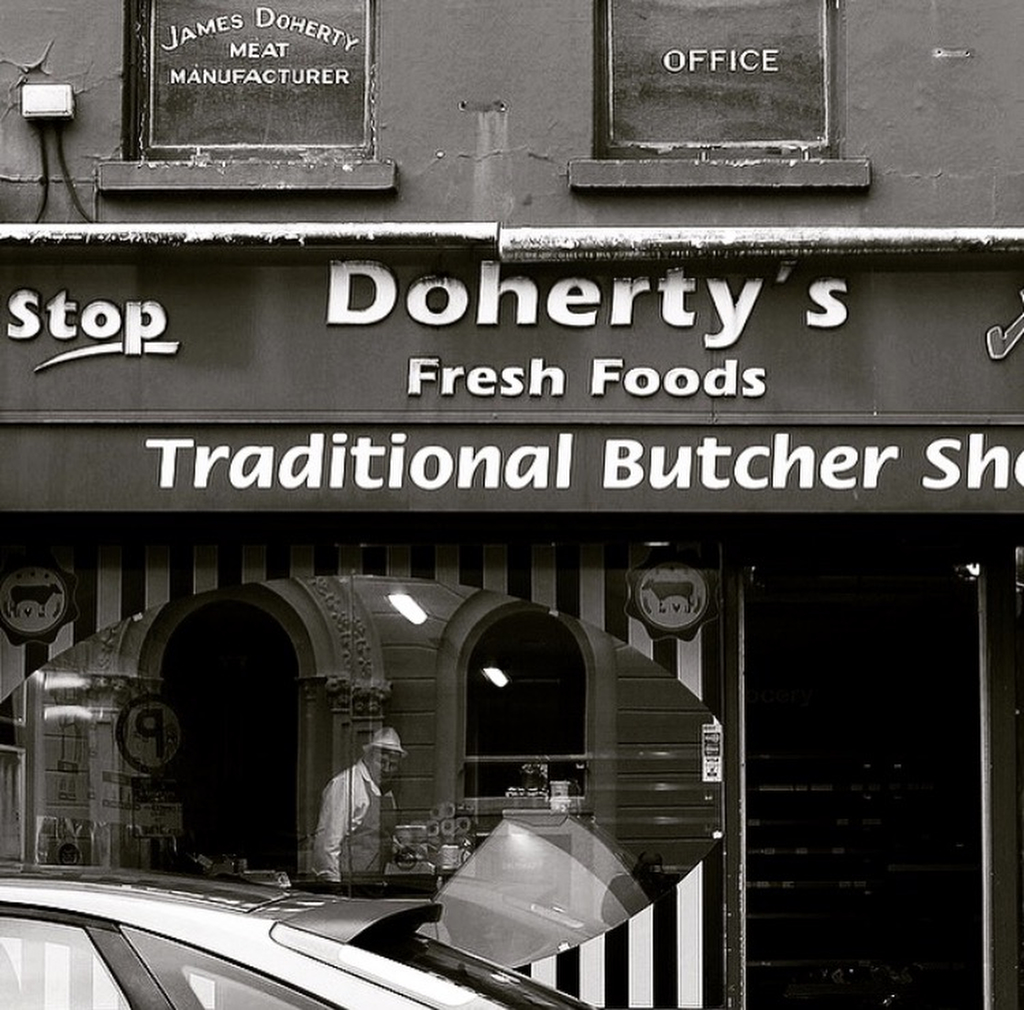 Years ago Michael Crampsie could be seen with the butchers bike doing home deliveries around the town or heading down to the Swilly Bus Station with the bike loaded up with boxes of pounds of the blue labelled special mince and the red labelled ordinary mince and not forgetting Doherty’s Sausages. In them days there was that much demand for Doherty’s meat that Michael Crampsie who was a great athlete was lighter than the load of mince on the bike and had to push the bike rather than get on at the start of his run. Doherty’s was a big employer in Letterkenny both on the Main street and down at their abattoir but also were a great supporter of local economy. 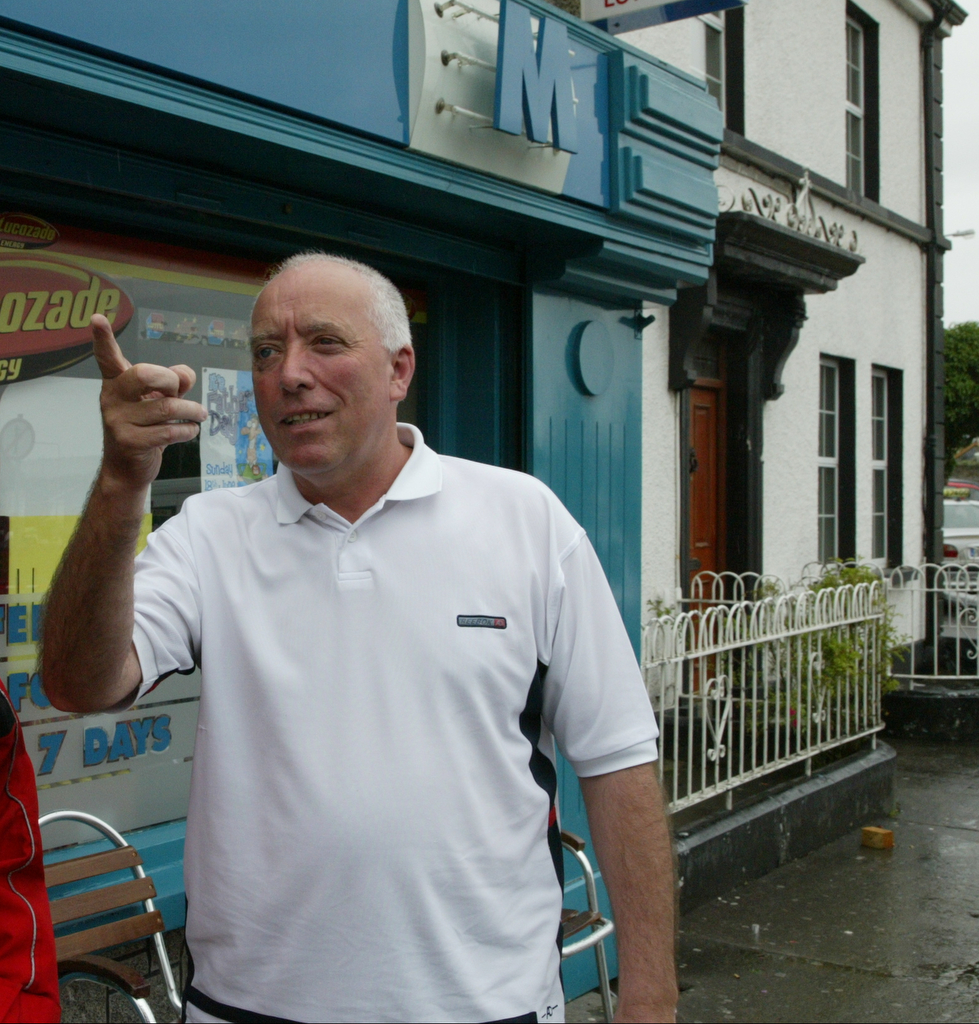 Fabian Mc Shane gets some word of advice from Cab driver Michael Crampise at Boyce’s Cafe before he starts his Donegal Rally.I remembers it well.. Michael Crampsie recalling great days on the Main St. in Letterkenny. Photo Brian McDaid

As a young mechanic starting out on a career my employer, the late Danny Caddye had the contract for the upkeep of Doherty’s fleet of petrol powered Ford Transit Vans which we serviced in an old garage on the Church Lane.

A photo taken by the Late Tony O’Shea , Letterkenny of a meeting in Boyle’s meeting rooms at the Markey Square including my grandfather Willie Coyle, Sally Blake, Dr. McGIney and Jim Caddye.

Parking of a different kind
Years ago the story goes that Letterkenny also came to a stand still the day a lorry was heading down from the mountain top with a heavy load onboard. In them days there was no ring-roads, every thing had to come down the main street. As the driver came to the High Rd the drivers brakes had overheated and were starting to fail, the driver displayed great skill to go through the junction at Crossview house and miss everyone. He was now on the Main St. which was level going past the post office and was getting the speed of the lorry slowed down a little but knew that the laden lorry was going to gather speed if he let it runaway down to the foot of the town.

The driver decided he was going to have to ditch the lorry. The driver ended up jamming the lorry up against the front of Duffy’s Tavern which was located between Balls Jewellers called McCullagh’s and Nee’s Drapers, the driver was trapped for a while after the impact but was soon rescued. Later recalling his eventful ordeal said even though he crashed the lorry and was trapped for a while he was so glad that he was pulled out by the Nee’s!

Duffy’s Tavern is now long gone from Letterkenny Main Street, Nee’s Draper are also long gone but a drapers are now in the same location call Peacocks, but Mc Cullagh Jewellers are still in the same place on the Main St. and are going from strength to strength they and going well run by the 5th generation of Robert Mc Cullagh’s family.

What an achievement
Over the years Letterkenny traffic problems may have got worse and the people of the town seem to be playing less of a part in the day to day activity of the town. At the weekend however I don’t know if he is the next great Barney Doherty of Letterkenny or if he is following in his old home address in memory of the great Dr. McGinley! 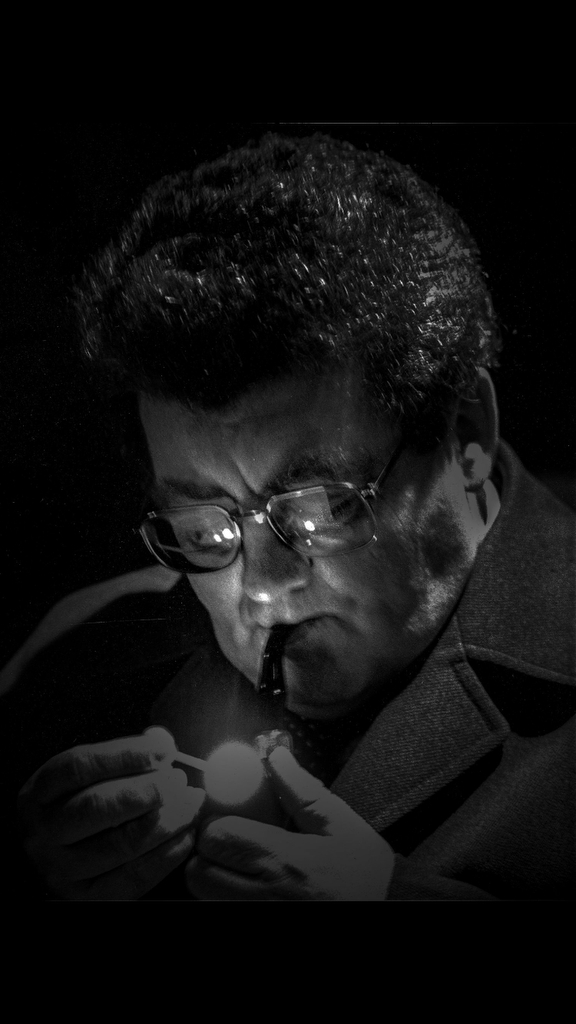 A classic study of Barney Doherty by Paddy Stevenson who lived on the on the Main St in Letterkenny and worked for the Derry Journal. The pictured was taken at a press conference in the Golden Grill for the Letterkenny Folk Festival.

Glencar’s Martin Orr reminded me of what Letterkenny once was like. The talented singer has being chipping away over the last couple of months at a request of doing something in memory of Letterkenny Seamy People’s by his family. On Sunday last Letterkenny was jammed as town and Donegal supported a most important cause for Pieta House. The event was run in the Voodoo which once was called the Downtown. 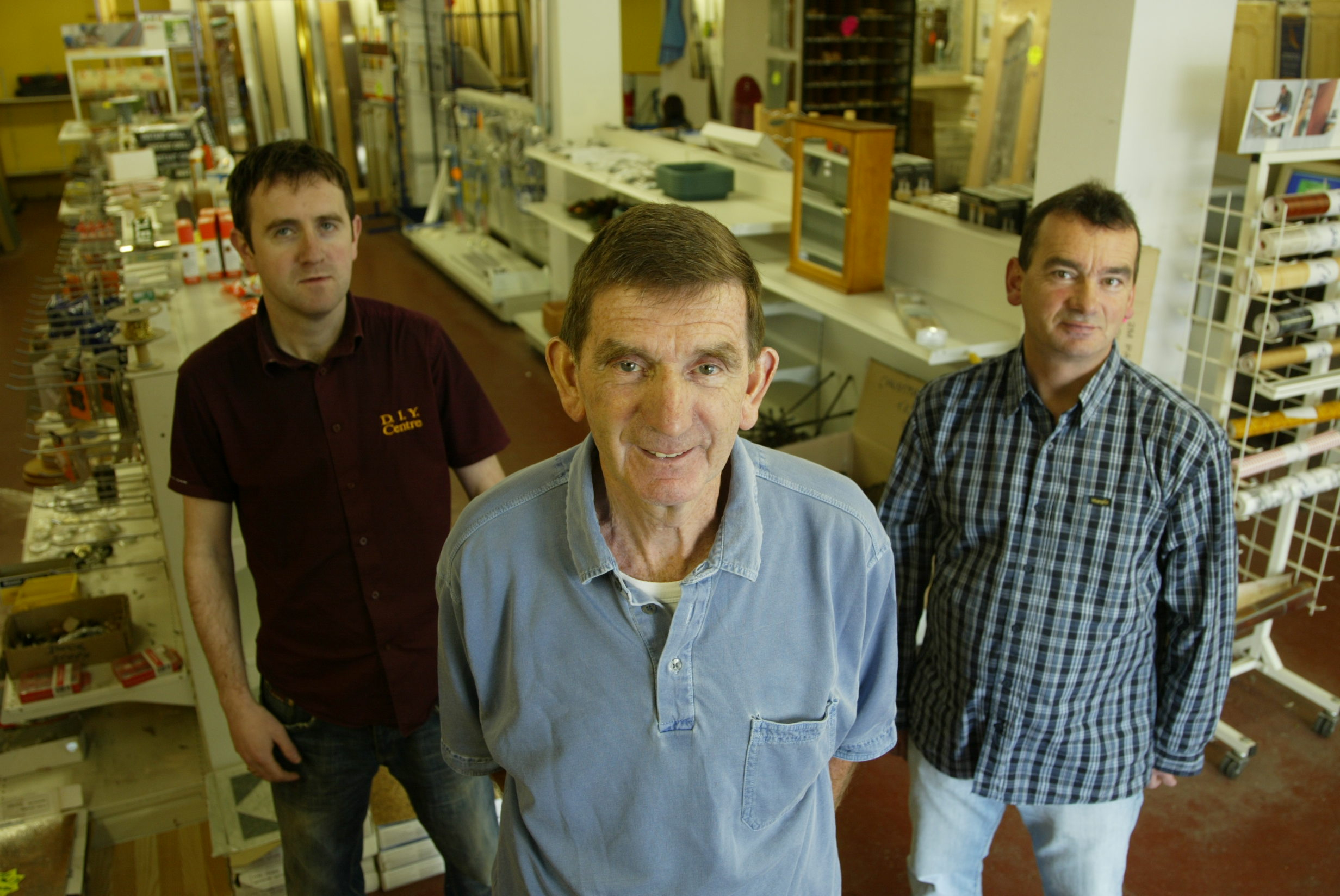 A young Martin Orr before he was famous from his days in Eddie Dunnes DIY with Eddie Eamon, You could say thatMartin DIY a great weekend end of music in Letterkenny which we have missed in the town since the days of the Folk Festival when he organised the fundraising gig in memory of Seamy Peoples at the the weekend in aid of Pieta House. Photo Brian McDaid

Martin had a post up yesterday to say he had passed the €15,000 mark. It’s a truly amazing thing to do and Martin should be truly proud of his achievement. We find it so hard to talk about the problems we are faced with in or lives so it think I will take a leaf out of Martin Orr’s book and finish on a song on the words of “Downtown” written by Tony Hatch in 1964.

“When you’re alone, and life is making you lonely
You can always go Downtown
When you’ve got worries, all the noise and the hurry
Seems to help, I know ,Downtown
Just listen to the music of the traffic in the city
Linger on the sidewalk where the neon signs are pretty
How can you lose?
The lights are much brighter there
You can forget all your troubles, forget all your cares
So go downtown, things’ll be great when you’re
Downtown, no finer place for sure
Downtown everything’s waiting for you
Downtown.”