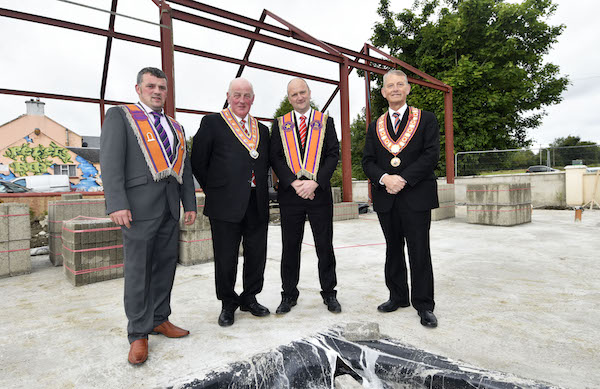 Orange Hall to rise from ashes as new cornerstone put down

A local Orange hall which was destroyed in an arson attack is to be rebuilt.

Grand Master Edward Stevenson has laid the foundation stone of a new Orange hall in Newtowncunningham.

The senior Orangeman joined lodge members and guests for the symbolic ceremony in the construction phase of the new building, which is expected to be completed by the spring of next year.

The hall was destroyed following the arson attack in September, 2014.

Deputy master Stewart McClean said he hoped the hall would be completed in the spring of 2018.

“We were all very saddened when the hall was attacked as it was used for many different things including dance classes and quilt-making while Donegal County Council also used the hall.

“It is fitting the foundation stone was laid by the Grand Master of the Grand Orange Lodge of Ireland in this year which is the 500th anniversary of the Reformation. The foundation stone will act as permanent tribute to Martin Luther and the other reformers who have given us the reformed faith which is the basis of the Orange Institution. A plaque marking this significant event will be in the entrance foyer of the hall when reinstated.”

In a significant occasion for Newtowncunningham True Blues LOL 1063, the lodge also unfurled a new banner replacing one which was lost in the fire three years ago.

The new banner pays tribute to the founding members of the Newtowncunningham lodge who came from the local company of the Ulster Volunteer Force. It also depicts the lodge’s war memorial in memory of seven members who lost their lives in the Great War and those who served on the front line.

Mr McClean said: “The banner is a tribute both to those who formed the lodge in 1911 and also those that served and died a few years later including the first worshipful master, Thomas A Sproule, who was killed during the Battle of Festubert.”

The banner was dedicated by the Grand Secretary of the Grand Orange Lodge of Ireland, Rev Mervyn Gibson, who has family ties in the area.

Mr McClean confirmed the banner would be carried on parade for the first time at the annual Twelfth parade in Rossnowlagh this weekend.

The Grand Master congratulated the members of Newtowncunningham on their achievements.

Mr Stevenson said: “Despite much adversity, lodge members are to be commended for their perseverance and resilience, resulting in not only the unfurling of a new banner but also the commencement of the construction phase of their new hall.

“I would like to pay tribute to all those involved and wish the lodge every success in this exciting new chapter of its history.”

The arson attack on Newtowncunningham hall took place only weeks before a similar incident in Convoy. The latter lodge opened their new Orange hall last October.