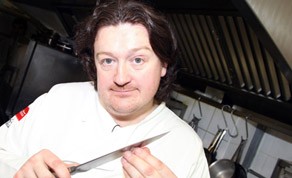 Donegal celebrity chef Conrad Gallagher is in hot water again after suppliers accused him of not paying his bills.

A TV star who has baked for Oprah Winfrey today tells how she was stung by the Letterkenny chef — after another of his restaurants closed over bad debts.

Controversial Gallagher has moved around the US, Ireland and South Africa in various roles, leaving a trail of unpaid bills.

The credit-dodger had returned to South Africa in recent years after being declared bankrupt there in 2009.

And the knives were out again for Gallagher after his latest African adventure turned sour.

The businessman has recently been evicted from a pricey eatery in Port Elizabeth called, Gallagher’s on Stanley.

He was accused of non-payment by several suppliers and was subsequently served an eviction order from the landlord.

And the Donegal native allegedly left a string of unpaid suppliers in his wake when he moved to Port Elizabeth from Cape Town.

The landlord at his former Cape Town restaurant, Cafe Chic, where he allegedly failed to fulfil an 18-month lease agreement, claimed she is owed €33,000 in rent and is taking legal action against him.

The Irish Sun has spoken to a string of suppliers in South Africa who say they have been cleaned out by Gallagher.

One Cape Town firm that suffered non-payment is Charly’s Bakery, which supplied another of Gallagher’s former businesses, Sundance coffee bar.

Speaking about how she was left out of pocket by the conman, Ms Biess — who has previously made cakes for Archbishop Desmond Tutu, former South African president Thabo Mbeki and TV legend Oprah Winfrey — told the Irish Sun: “He moves around, not paying people. That’s what he does.

“We supplied to Conrad at Sundance coffee bar.

“He hasn’t paid a lot of suppliers and staff. He moved from Cape Town and seemingly done the same in Port Elizabeth.

“We got some money back by withholding product, we demanded cash payments. Others have got nothing back.”

Gallagher has recently admitted he did business with Charly’s Bakery when he owned Sundance, and added that he had “no idea if I still owe them money”.

Another business owner claims: “He didn’t pay us money, it would be four figures.

“We had to pursue him, he left Cape Town, we pursued him to Port Elizabeth. He would always be so charming in person, calling me ‘my darling’.

“He would say he would pay but then there would be no payment. We still haven’t been paid. He did this to a lot of small businesses who simply can’t afford to be done like this.”

Ms von Ulmenstein said: “The Sour Service Award goes to chef Conrad Gallagher, whose newest restaurant Gallagher’s on Stanley in Port Elizabeth has just been closed down due to non-payment of his debts — a few months after having been evicted from his former Breda Street restaurant premises in Cape Town (Café Chic), also for non-payment of rent, with payment being due to suppliers in Cape Town too.”

And amid speculation Gallagher could return to his homeland, von Ulmenstein added: “Conrad has fled to Ireland once before, leaving significant debt in Cape Town.”

Gallagher is being pressured by several South African suppliers, who have come forward to complain about his unpaid bills.

Confronted recently about the debts, Gallagher admitted to having some “bad debt with a few creditors” in Port Elizabeth.

Blaming bad luck, not understanding the local market and not being a “perfect person”, he said he was working towards clearing the debt and had already made major inroads in doing so.

Gallagher continued: “After our very quiet opening in July we were very busy, but in early September things started quietening down drastically.”

He rose to fame with Dublin restaurant Peacock Alley, where he was awarded a Michelin star between 1998 and 2002.

He then opened Ocean seafood bar in Dublin’s Charlotte Quay, as well as Lloyd’s Brasserie, Christopher’s and Conrad Gallagher’s Shaftesbury Avenue restaurant in London in 2001, but all failed due to financial problems.

In recent years he has moved around the United States, Ireland and South Africa in various roles, leaving unpaid bills and local suppliers reeling.

The chef’s return to Dublin saw him open Salon Des Saveurs in the city centre and Conrad’s Kitchen in Sligo.

In July 2011, Revenue filed winding up petitions against companies behind Salon de Saveurs and the venture in Sligo.