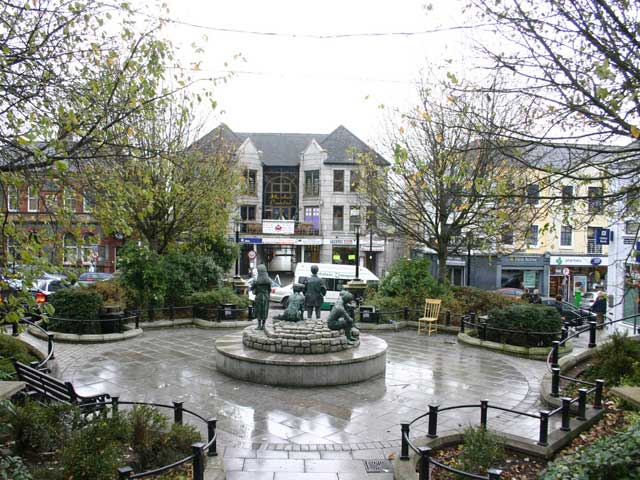 Market Square: ‘Open it to the community, close it to the vandals’

The Mayor of Donegal, Councillor Gerry McMonagle, says that the Market Square in Letterkenny should be ‘opened up to the community and closed down to the vandals’.

Sinn Féin Councillor McMonagle was speaking at the monthly meeting of the Letterkenny Municipal District, at which he called on an investigation to be carried out to explore what work needed to be done to the Market Square to make the area ’safer and free from vandalism’.

Last month, statues at the Market Square were vandalised. The statues depict local children at a hiring fair day in Letterkenny and are one of the town’s most notable and recognisable structures.

One of the statues was knocked over and damaged and was found near where it had been standing.

A similar motion was tabled by Fine Gael Councillor Jimmy Kavanagh, who asked that the trees be cut back so that the area was ‘opened to view’.

The area is covered by CCTV that is jointly operated by Donegal County Council and An Garda Siochana.

“The hedgerows and trees are completely blocking out the central area of the square and this is allowing these anti-social acts and acts of vandalism,” Councillor McMonagle said.

“The square is the jewel in the main street and attracts a lot of people.

“The growth and foliage restricts people’s use of the Market Square.”

Councilor McMonagle suggested that a meeting be held with the Tidy Towns committee, environmental officials and the town gardener.

He said: “It is a very ornamental area and gets glowing reports in the Tidy Towns. It’s usage as a public space is being diminished because of the trees and the shrubbery.

“We need to open it up to the community and close it down to the vandals – we need to allow the CCTV to work in the favour of everyone.”

Councillor McMonagle said that the band stand at the Market Square could be used more extensively and added: “We have stone in there commemorating Jason Black climbing Everest, but you wouldn’t know it’s there.

“We have CCTV and lighting there and it hasn’t stopped this type of incident or identified the people responsible for the damage.”

Market Square: ‘Open it to the community, close it to the vandals’ was last modified: July 12th, 2017 by Chris McNulty