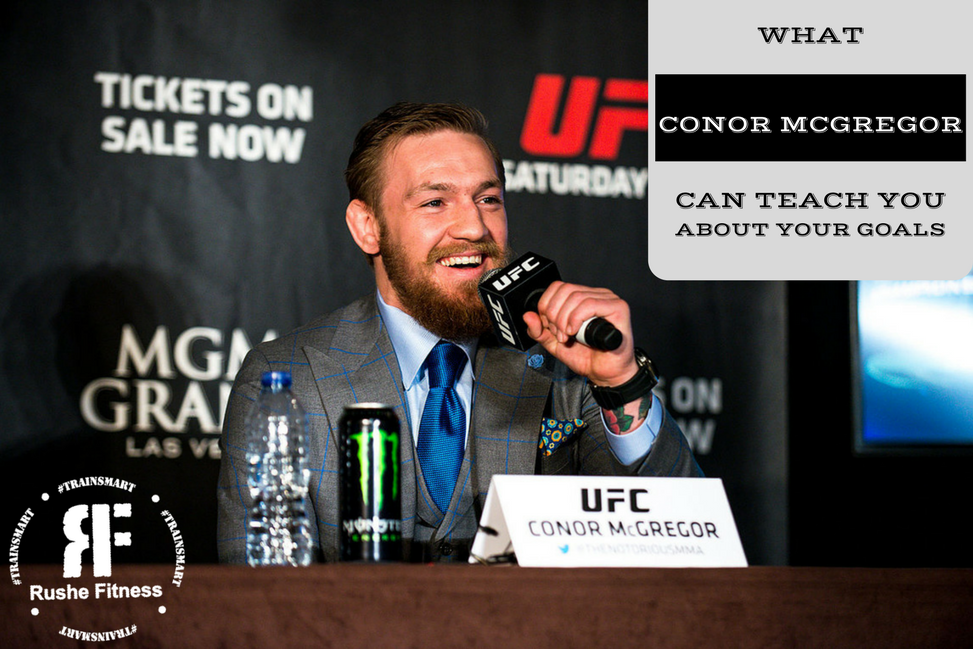 DD Fitness: What Conor McGregor can teach you about your goals

“Doubt is only removed by action. If you’re not working then that’s where doubt comes in.” – Conor McGregor

After an 8-fight winning streak between 2011 and 2012 he was a 2-weight world champion in Cage warriors, the first European to do so.

By February 2013 he was signed to the UFC and the McGregor era began.

“There’s no talent here, this is hard work. This is an obsession. Talent does not exist, we are all equals as human beings. You could be anyone if you put in the time. You will reach the top, and that’s that. I am not talented, I am obsessed.” – Conor McGregor

Conor has had one goal from the start, to be the best.

He wants to be remembered as one of the greatest of all time and he is on course to do just that.

Love him or hate him, McGregor didn’t get here from just his ability to talk.

He has natural ability, there is no doubting that, but he is also willing to put in the work. He studies his opponents. He trains to match their strengths and take advantage of their weaknesses. This doesn’t come from talking, this come from hard work.

What can this teach you about what you want to achieve?

For most when they set a goal, no matter what it is, two things will happen.

1. They will set the main goal and overlook the steps needed to get there.

2. They will let doubt and the doubters steer them off course.

When you set out a goal, you cannot just have an outcome.

You must have behaviour goals and steps in place to help you to achieve your end goal.

These steps would not be taken lightly and there will inevitably be roadblocks.
> An ACL injury got in the way.
> The Featherweight champion pulling out of the 1 st title fight got in the way
> Taking on an opponent from another weight class got in the way.

So, the steps may have changed slightly along the way, but the Outcome goal never changed.

When you set your goal, no matter what it is, expect difficulties along the way.

These will happen, it is called life and it will inevitably change.

If you only have an outcome and don’t have the appropriate steps in place to help you to reach your goal, what are you going to do when life gets in the way?

You will fail, and probably have many times before.

Does that mean you should give up?

No, it means you need to re-set and set the appropriate step in place to help you to reach the end goal.

“I am cocky in prediction. I am confident in preparation. But I am always humble in victory or defeat.” – Conor McGregor

Then you have doubt.

This is twofold, as you not only have self-doubt, but you also will have the doubter and the fear of failure and how they will react if you do can be paralysing for people.

Self-doubt is a normal.

This fear is what keep you from harm, it keeps you from pushing further into the discomfort that you will feel whenever you start to change yourself and your current situation.

Just know that this discomfort is a natural feeling, do not shy away from it, you need to embrace it and use it as motivation to push you closer to your goal.

“Nothing good ever comes from worrying or sitting there feeling sorry for yourself… keep positive and keep pushing on and things will turn good.” – Conor McGregor

Then you have the doubters and naysayers.

The fear of failure and how you will look to these doubters, can stop you in your tracks.

“Doubt is only removed by action. If you’re not working then that’s where doubt comes in.” – Conor McGregor

Why are you worried about how you will look, to people who would get joy if you failed?

This should be your greatest motivation.

Even if you do fail, learn from it. Find out why? What happened? What you can do better next time?

Whatever you do, DO NOT GIVE UP, ever.

“I never lose, either I win or I learn.” – Conor McGregor

For more information, contact me through the link below.