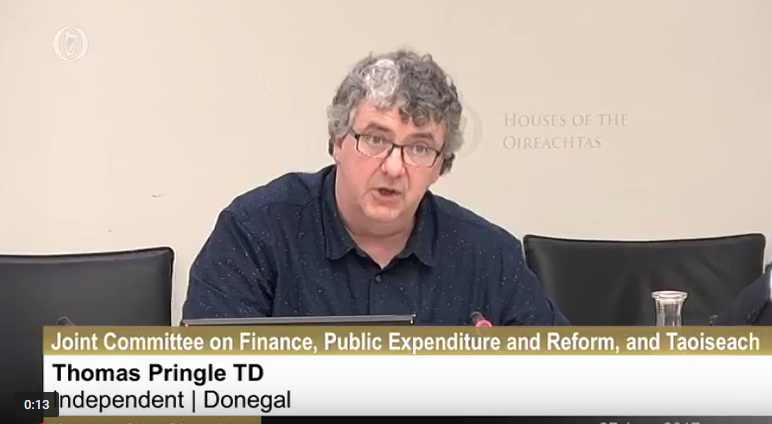 Independent Deputy Pringle was responding to comments made by Mary Coughlan about Independents during a Raidió na Gaeltachta interview, in which she said they have little or no effect.

“I’d like to ask what has Mary Coughlan’s legacy been for Donegal after decades of being in Government for 21 out of the 24 years she was elected? What has she achieved for Donegal?” asks Pringle.

“I can safely say that her legacy has been a negative one for Donegal. During all her time in office Donegal has had the highest rates of unemployment, the worst depravation rates in the country and has always lagged behind the east coast in terms of regional development.

“Mary Coughlan’s government institutionalised the neglect of rural communities which has led to the delayed investment of infrastructural projects like Broadband, housing and transport. That to me spells ineffectiveness and blaming independents for that is just another cheap tactic.

“The people of Donegal voted independent in 2011 to try and change that legacy and this will be achieved by changing how government works by making sure that it works for all the people and not the select few. I’d like to remind her of the work that independent politics carried out in overturning water charges which Fianna Fáil tried to take credit for after all their flip flopping on the issue. Her own party caved into Fine Gael demands on water metering which shows the disregard Fianna Fáil continues to have for the needs of local communities.

“As independents we have the power to work directly with local communities and represent their voice in the Dáil, making sure they are heard when political parties continue to ignore them and push for policies which would negatively impact them.

“We need politics that works for everyone no matter where you live in Ireland. Mary Coughlan’s politics and that of Fianna Fáil have always been to protect the elite few. Mary’s comments are more about Fianna Fail trying to make people forget that it was her and her politics of looking after developers and speculators that led us into the worst recession in Irish History.

“I think that the people of Donegal will never forget the role that Fianna Fail have played and I believe they deserve better going into the future” concludes Pringle.

‘Mary Coughlan’s legacy nothing to be proud of’ – Thomas Pringle TD was last modified: July 19th, 2017 by Rachel McLaughlin
Tags:
may coughlanThomas Pringle