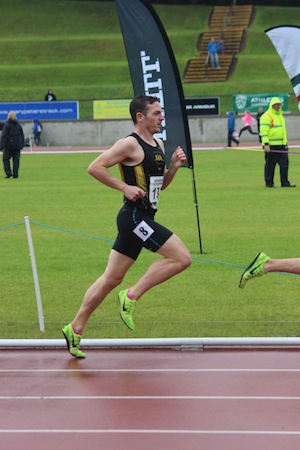 written by Chris McNulty July 24, 2017
Facebook0Tweet0LinkedIn0Print0
Danny Mooney continued his excellent recent form, when he ran 4.03.63 for the mile race in Tuesday evening’s Cork City Track and Field meeting.
American, Sam Prakel, won the race in 3.55, with fellow American, Robert Domanic, winner of the mile in the recent Letterkenny International Track and Field meeting, finishing 4th  in 3.57.
The first 9 athletes all  recorded times of sub 4 minutes.
Danny was in action again just a few days later at the Irish Life Health Senior Track and Field Championships at Santry, which were held over the weekend.
On Saturday, Danny qualified for the 1500 m final when he ran 3.57.31 in his heat.  24 hours later, Danny finished just outside the medals when a time of 3.56.42 saw him finish 4th in the final.
The race winner was Clonmel AC’s Sean Tobin in 3.53.90.
Darren McBrearty qualified for the 800m final when  he clocked  1.57.76 in his heat on Saturday. On Sunday, Darren turned in a tremedous performance in the 800m final.
He improved his time by 5 seconds or 4.3%. However, his time of 1.52.62 gave him 4th place and he was  just one fifth of a second outside the medals. Mark English won the race in 1.50.89.
Annmarie McGlynn put on an excellent performance in the 5,000m at Santry on Saturday. She picked up the silver medal in a time of 16.35.73.
The gold went to Emma Mitchell of Queen’s University AC whose time was 16.27.08.  On Sunday, Annmarie was 6th in the 1500m in 4.35.95, with Emma Mitchell picking up another gold medal in 4.31.55.
Frank Pinder finished in 8th place in Tuesday evening’s 5K in Kilmacrennan. His time of 21.35 also gave him 1st place in the M50 category.  Shaun Stewart was the race winner in a time of 17.13.
Ivan Toner and Marian Kerr were both first in their respective  40+ categories in Thursday’s St Paul’s 5K in Ramelton. Ivan was also second overall in a time of 16.09. Finn Valley AC’s Mark McPaul was first across the line in 15.58. Marian Kerr had an excellent run and came home in 22.17.
Karol Duggan stormed to victory in Friday’s Churchill 5K. Karol had an outstanding race and his time of 15.27 was his best since running 15.10 two decades ago as a teenager. Like so many of this summer’s Grand Prix events, LAC runners were to the fore in the race and in the categories. Paul McGlinchey had a fine run and his time of 16.34 gave him 2nd place.
Raymond Birch’s good run of form continued and he clocked 16.52. He was closely followed by Gerard McGranaghan in 17.06. Aidan McKenna’s time of 18.40 gave him 2nd place in the M40 age group. Barry Mackey continued his domination of the M50 category and took first place in 19.00.
Sheila Regan, back from the USA for the summer, was in fine form and was the first woman in a time of 20.56. Kevin Greenan was first in the M60 category in 21.06 and Richard Raymond continued his good form and his time of 21.52 saw him finish 2nd in the M60 group. Linda Cronin had a good run and finished in 26.48.
Several LAC runners took part in Saturday’s stamina sapping  Milford and District Adventure Race, which incorporated road running, trail running, cycling and kayaking. In the short race, Shauna McGeehan was the winner of the women’s race in 1hr 20mins 43secs. Peter McLean also performed well in the event.
Sean McFadden was 3rd in the long race. The endurance specialist’s time was 2.40.08. There were also fine performances from Adrian Callaghan and Cathal Roarty.
Paul Lee’s time of 21.58 in the Letterkenny parkrun gave him 5th place overall and first place in the 50-54 category. Mary Sweeney, in her 3rd Letterkenny parkrun, ran her best time so far  and was the first woman home in 24.50.
Letterkenny AC’s very popular annual ‘Danny McDaid 15K’ will take place on Sunday July 30th. The race starts at 11.30am.
Registration, changing, presentation and refreshments will all take place at Aura Leisure Centre. The entry fee is €15,  there is a very extensive prize list and all competitors will receive a technical ‘T Shirt’ with entry.
The race is over a distance which, although popular in many countries such as France and Portugal, is rarely run in Ireland. It provides ideal preparation for anyone planning either a Half or a Full Marathon. The club is very grateful to The Station House Hotel for their continued, generous sponsorship.
The numbers drawn for the LAC mini-lotto on July 20th were 2, 17, 20, 24. There were no Match 4 winners and 1 Match 3 winner- Billy Gallagher- won €80. Next week’s jackpot will be €2,000.
Letterkenny AC: Danny Mooney continues his excellent form was last modified: July 24th, 2017 by Chris McNulty
Facebook0Tweet0LinkedIn0Print0
Tags:
Danny MooneyletterkennyLetterkenny AC