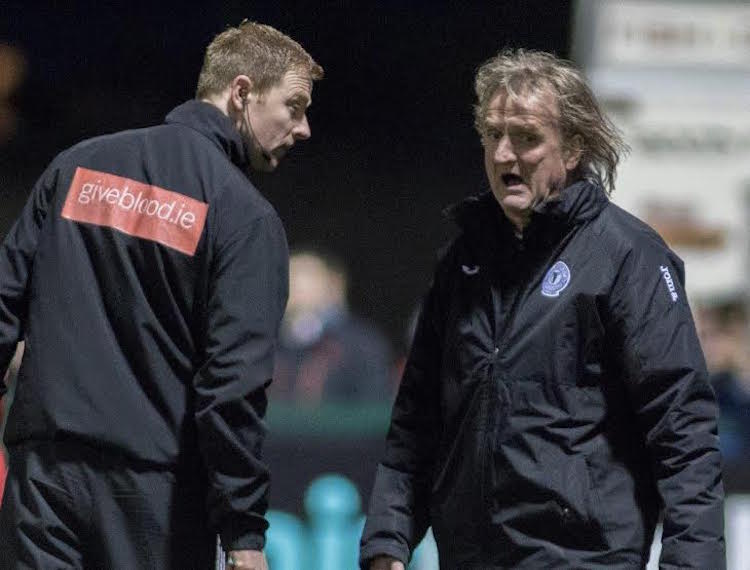 Ollie Horgan: Derry City looked like the team that had ten days to prepare

So near and yet, by the end, when the pumped fists of the Candystriped hundreds provided a gutting backdrop, so far as Finn Harps fell to defeat to Derry City last night.

Darren Cole, on 87 minutes, and Aaron McEneff, in the 93rd, netted the goals as Derry struck twice to leave Harps dejected and suffering a first defeat in three.

Harps looked on course for a scoreless draw – a result they’d have snapped beforehand – until Cole pounced on poor Harps defending with the finish line in sight.

As Harps committed forward, McEneff sliced in for a second to round off the night.

“At that stage, the most we’d have got was a point,” Harps manager Ollie Horgan said of those late moments.

“Derry took over in the last 20 minutes.

“I have no problem with the second goal, but the first goal? Absolutely. It was a routine corner kick that we didn’t clear and it fell to the man in the hole.

“The warning signs were there for ten minutes beforehand. They looked like the team that had more rest and recovery. Fair play to them, we’ll take our oil and move on.

“Derry kept going and were relentless in that last 20 minutes.”

Harps had some big chances, Sean Houston heading wide from a good position in the first half and Dean Jarvis bravely blocking from Eddie Dsane in the second, while Ethan Boyle might have had a penalty as he went down under a shove from Josh Daniels, but it wasn’t to be Harps’ night.

Horgan said: “We were quite good in the first half and we had plenty of energy. There wasn’t a whole lot in it, but I thought we shaded it.

“They ran out worthy winners because of the last 20 minutes.

A win last night would’ve taken Harps to within a point of Bohemians in sixth place. As it is, they go to Bray on Friday night two points above the relegation zone.

Horgan said: “We’re in a fight and it’s great to be in that fight. I’ve said it from day one, we just want to stay in that fight and not fall away. Even if we’d won against Derry, I don’t think we’d have got away from the battle and would have still been sucked into it.”

Paddy McCourt will return from suspension for Friday’s clash in Bray.

However, Horgan added: “We have a few injuries that need treatment of some sort. Some of them will be under pressure.”