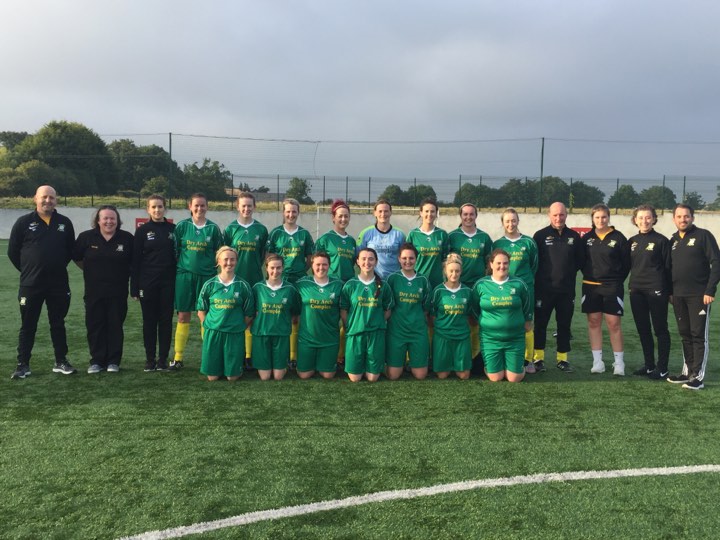 Bonagee give it everything, but miss out on WFAI semi-final in cruel defeat

Former Donegal manager Jim McGuinness used to have a saying – ‘if you give everything, there is nothing left to give’ – that rang true for Bonagee United in a stomach-churning WFAI Intermediate Shield quarter-final loss to Hardwicke in Dublin.

The Dry Arch girls gave it everything and more and when it came down to the lottery of a dreaded penalty shoot-out, Bonagee could make peace with the fact that they had left every fibre of their beings on the turf.

For 120 minutes, Bonagee went to the trenches as if their lives depended on it and on another night might have nicked it.

Substitute Natalie McFadden dared Bonagee to dream when she burst through to open the scoring midway through the second half.

Lawlor, one of two Irish senior internationals – alongside Sue Byrne – on the Hardwicke side galloped into space and let fly with a stunning strike that gave Denise McElhinney, the Bonagee ‘keeper, no chance.

A frenetic start to the game saw Hardwicke turn the screw several times, but Bonagee repelled the attacks.

McElhinney saved from a Lawlor snapshot from a tight angle in a first half of few clear-cut openings.

With Shannon McBride battling well in the lone striker’s role, Bonagee did have their moments and Anna Doherty might have been in for the opener in the 33rd minute.

Doherty broke through and was denied by the Hardwicke ‘keeper and when the midfielder went to ground, Bonagee cried foul but the referee turned down their penalty claims.

Bonagee’s industry bore fruit as they curbed the Hardwicke attack, with Taylor Feeney and Siobhan Sweeney putting in fine displays, with a midfield trio of Doherty, Chantelle Grant and Alice Diver giving their side the platform.

Youngster Sweeney, stationed at right-back, was the game’s stand-out performer. Sweeney didn’t put a foot wrong over the entire contest and certainly will have impressed the watching FAI officials in attendance.

Bonagee went for it in the second half and McFadden, not long in as a sub, showed her predatory instincts with a clever and composed finish after being played through on goal.

McFadden might well have had a second soon after, but was denied by the ‘keeper on this occasion and Hardwicke managed to get a block in on Brenda Sweeney’s follow-up.

The Dubliners drew level when Lawlor riffled home and from then to the finish of an absorbing, fiercely-contested cup tie that was only decided in a gut-wrenching shoot-out.