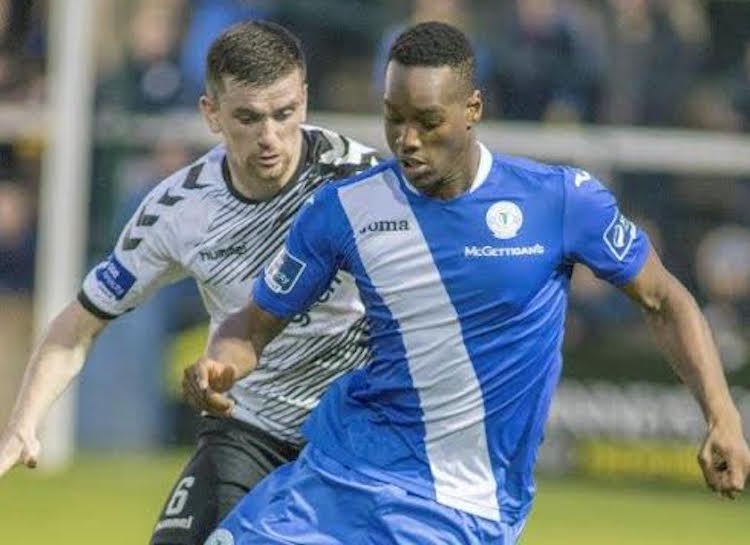 French striker Ibrahim Keita says Finn Harps can be his stepping stone to relaunch a career in England.

The 21-year-old signed for Harps from Greece side Doxa Proskyniton, having previously spent four years at Wolverhampton Wanderers, where he was close to a first team breakthrough.

Keita made his first start for Harps in Monday’s 2-0 derby defeat to Derry City having come in for a late cameo in the previous game, a 2-1 win over Bohemians.

“I was happy to start my first game,” Keita said as goals from Darren Cole and Aaron McEneff sank Harps.

“I wished that we had won the game. It was difficult. We created more chances than them and I think we deserved the win, but that’s football.

“It was very disappointing to lose two goals late in the game. We’re going to forget about it and win the next game.

“I enjoyed the game. I like it here. The players and the coach are good with me. I want to play as many games as I can.”

The surprise move to Harps came about via his agent, Philippe Kontostavlos, who helped negotiate the deal.

Keita was capped by France at Under-16 level in a side that include Celtic’s Moussa Dembélé, Olivier Ntcham who signed for Celtic from Manchester City two weeks ago, Lyon forward Gnaly Cornet and Atlético Madrid defender Lucas Hernandez.

He had a four-year spell at Wolves and was highly-rated at Molineaux. Mick McCarthy took the 15-year-old Keita to train with the first team within a month of his arrival from Saint Marcel in France. He was on the bench twice for the Wolves first team and was regularly taken as part of the match day squad in Kenny Jackett’s reign as manager, before contract talks broke down and Keita departed.

Now, he wants his time in Ballybofey to act as a springboard back across the Irish Sea.

He said: “I was close to the first team at Wolves.  I wish to go back to England, if I can. That is my dream, to play in England.

“I was excited to come to Ireland. I wanted to come here and see how the League was here.

“It’s not a big change from England to here. The football is the same.”

Keita, previously on the books of VSS Kosice in Slovakia, has come in to replace Ciaran O’Connor, who has joined Bohemians on loan from Dundalk for the remainder of the season.

Harps are two points above the relegation zone and Keita is aiming to do his bit to keep Ollie Horgan’s team out of danger.

He said: “I want to help Finn Harps to stay in the top division. I think that we will. I will do everything to stay in the team and play as many games as I can. Hopefully I can score some goals for the team.”