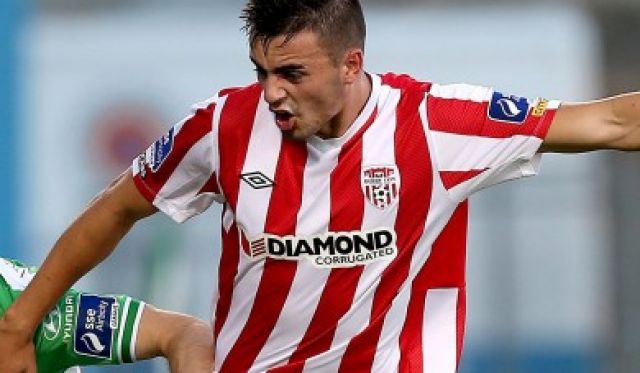 Timlin in, Doherty out: More transfer activity at Finn Harps

As one door closes at Finn Park, another opens with the transfer window ready to close.

Derry City midfielder Mark Timlin is poised to make a surprise move to Finn Harps, the Buncrana man having trained with the club last night ahead of tomorrow’s trip to Bray Wanderers.

Timlin has had an unhappy time of it since returning to City last winter after spending the 2016 season at St Patrick’s Athletic.

Timlin was linked with a move to Sligo Rovers, but Harps managed to get a spoke in and land the 22-year-old man’s signature.

Timlin could go straight into the Harps squad tomorrow when Ollie Horgan’s man head for the Carlisle Grounds to take on troubled Bray.

One man who won’t be on the bus is goalkeeper Harry Doherty, who has signed for Carrick Rangers in the Irish League.

Doherty had spells across channel at Brighton and Charlton before returning to his native Cockhill Celtic. Doherty has become frustrated at a lack of action in Ballybofey and the Irish underage international has signed on at the ‘Gers.

“I would like to thank Harry for all the hard work he put in while here at Finn Park and on behalf all at the club I want to wish him every success in his future football career” Horgan said.

It is expected that Lee McCarron will now step up to become Ciaran Gallagher’s understudy.