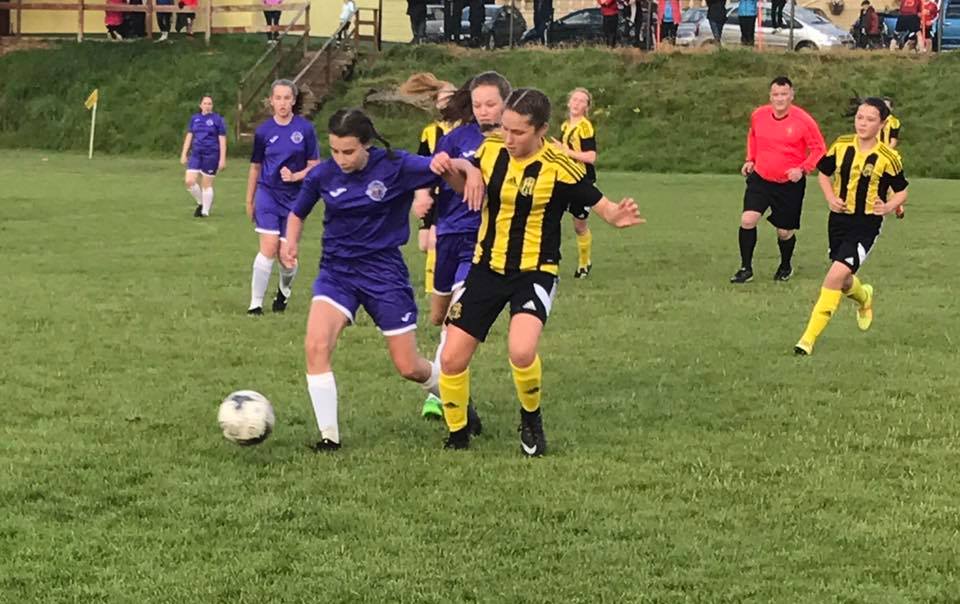 The Donegal Women’s League sections are hotting up now and there remains the possibility of play-offs in the all Leagues!

In the Under-12 League, Illistrin and Lagan Harps lead the way after Illistrin defeated another of the leaders, Mulroy Academy M, on Monday night.

In the Terry Leyden Under-14 League, Illistrin and Lagan Harps – who are locked at the summit – played out a scoreless draw on Wednesday night (action from the game pictured above). The sides have conceded just one goal each all season so far and seem set to need a play-off.

Mulroy Academy and Lagan are the title chasers in the Arena 7 Under-16 League.

This Donegal Women’s League U12 match was played in excellent conditions in Illistrin.

Both teams have had great seasons but the home team took the three points on offer with an excellent display despite a spirited effort from Mulroy.

The Illistrin girls got off to a great start when Myah McBride found Ciara Molloy and she swept the ball home with a great finish.

Illistrin would continue to dominate the first half but Mulroy were always dangerous on the break with Rachel Friel and Clodagh Herron in particular causing concern in the Illistrin defence. 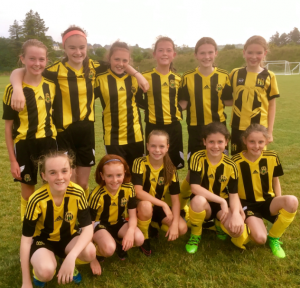 Claire Gallagher was having  a great game on the right wing for Illistrin and Nicole McDaid almost extended their lead with a great run and shot but it was well saved by the Mulroy keeper.

Illistrin almost increased their lead at the start of the second half when a great run from influential midfielder Aobha Ni Aragain ended with a great strike that narrowly went wide.

Soon after Mulroy created their best chance when Rachel Friel made a great run down the left side.

Her cross was met by Clodagh Herron but Aoibhin Randles read the situation really well in the Illistrin goal to keep the score at 1-0.  A pivotal point in the game as Illistrin went down the other end and Nicole McDaid found Ciara Molloy and again the striker made no mistake with a neat finish.

Illistrin were starting to dominate the midfield area with Sarah McGinley causing problems on the wing and Sarah Robinson had a great shot that was well saved by the Mulroy keeper.

Mulroy kept battling hard with Caitlin Heraghty in particular working extremely hard in the midfield area.  The next goal was going to be important and the home team scored when Nicole McDaid’s through ball somehow finished up in the net.  If that goal was a bit lucky then Illistrin’s 4th and McDaid’s second was executed in fine style.

Ciara Molloy’s corner found McDaid in the box and she unleashed a full volley that flew into the net.

A deserved victory for the home team on the night playing some great football but a lot of credit to Mulroy who kept battling to the end.

Liam McLaughlin once again had a fine game as referee and encouraged both teams throughout which was appreciated by both teams.

Swilly made the trip to Triagh-A-Locha on Monday evening. Mulroy opened the scoreline with a early goal by Megan McLoughlin.

Both teams battled well but Mulroy seemed to have the edge in early stages of game.

Bronnagh Duffy with superb control and strength finished a skillful cross by Megan McLoughlin. Mulroy were in fine form resulting  with the lively Jessica Coll scoring a cracking goal.

Emily Irwin in the backline for Swilly was solid and held her backline well.

Swilly came back stronger in second half and fought hard with great determination. Both teams were not going to give in easy.

Aoife Sweeney with her usual cool calm head in the backline kept Swilly at arms reach.

Swilly keep the pressure on and were rewarded with a well deserved goal from Kelley Boyle.

Fast action and great skill was on display in the second half.

In the dying minutes Tamara Blaney decided to give Mulroy one last blow with a super ball that defeated the Mulroy ‘keeper.

Great team effort from all girls.

Mulroy players that contributed well to game were Olivia Friel and Roisin Carr.

On a windy but dry night in Maghergallon, Gweedore Celtic went 1-0 up just before the break when Chloe McCole found the back of the net.

Finn Valley kept the pressure on Gweedore Celtic both team being evenly matched throughout the game.

Aibigh McMenamin’s free kicks were outstanding throughout the game, she also did extremely well to shoot down the Gweedore attack.

Most impressive for Gweedore Celtic was Maeve Boyle who went on the run and from a very awkward angle she some how managed to find the back of the net.

With Finn Valley still keeping the pressure up, Emily Boyce was unlucky not to fine the back of the net.

Finn Valley put in a number of good balls but Mary Kate kept a clean sheet.

With five minutes to go Maeve Boyle went on the run again and once again found the back of the net.

Impressive for Valley in midfield was Sarah Conaghan.

Best for Gweedore was goal scores and our the defence of Caitlin McCombs Grace Maher and Bridin Hynes.

Lagan were one up at half time courtesy of Harriet McCrossan, Lagan extended the lead in second half with Niamh Sweeney, Harriett McCrossan and Sinead Deasley.

A’alya Mustafa nearly scored twice only for the Gweedore keeper to be on form.

The younger girls of Mia Devenney, Sophie Canning and Aileen Sweeney also played their part and competed well for Lagan.

As the Terry Leyden Under-14 League draws to a close, still nothing separates the top two, after yet another league 0-0 draw between Lagan Harps and Illistrin.

Illistrin shaded the first half, with Erika Gallagher outstanding in mid field and Sinead McBride always a treat on the right, but Niamh Monaghan did well, making good tackles.

Rebecca McGlinchey had a good effort blocked by Lucy Canning.

Shannon Cunningham was inches away from putting Lagan one up when she headed just over from a corner from Lucy Canning.

Aislinn Coll for Illistrin sent a good ball across the box to Ciara Doherty but Serena McCrossan cut out the danger. 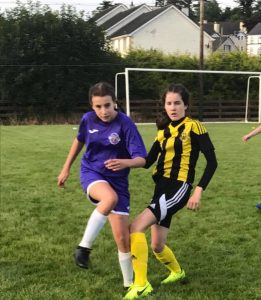 Sinead McBride hit the post from a thunderous long range strike. Lagan got a foot on the game in the second half with Erin Doherty and Maria Boner getting to grips in the middle.

A good ball from Erin send Gaby O’Donnell clear but Aobha Gallagher made a good block. Niamh Sweeney and Gaby O’Donnell link up well but Orla Corry saved well, and Meghan McDaid sent Zoe McFadden clear on the counter attack, with Courtney Gallagher making a good save at Zoe’s feet at the other end.

With minutes remaining Erin Doherty send a pass through to Maria Boner with she shot just wide.

Orla Corry saved from a Jessica Leese shot, the last chance came to Ciara Molly with her shot saved from Courtney Gallagher.

Both teams should be commended on yet again a exciting end to end heart stopping performance.

Lagan wish Sinead McBride a speedy recovery from her first half knee injury.

Best for Lagan was Niamh Monaghan, Shannon Cunningham and Niamh Sweeney with Erika Gallagher, Zoe McFadden and Aobha Gallagher standing out for Illistrin

Bonagee United welcomed Raphoe to the Ary Arch Park for what was a very entertaining game, with both teams attacking well in the first 20 minutes of the game.

It was Raphoe who took the lead through Shania McMonagle when she nipped the ball through the defence.

Just before the end of the half Hannah Hopkins of Bonagee had a long run with the ball and her long range shot beating the keeper,

In the second half McMonagle soon added to her first the with another three goals with good play from Raphoe.

Hannah Hopkins took the game back to 2-4 and the Bonagee girls really stepped it up with Grace Murphy making it 3-4.

It was a entertaining game with both teams giving it their best.

Swilly Rovers got off to a great start, with a goal in the first five minutes from Orlaith Connolly. Valley were quick to respond with two successive goals, only for Orlaith to score again, making the sides even.

The second half was more evenly contested, with both team scoring another goal each. A great evening of football, both teams showed some great skill and determination. A great crowd of supporters for both teams made it a lively and enjoyable game.

* The Under-12 League resumes again on Monday, August 14