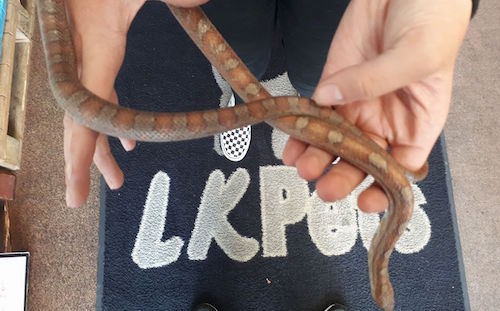 A farmer in Co Donegal was left terrified after being confronted by a snake while checking on animals.

The farmer was walking lands at Milford when he was confronted with the American Grass Snake.

He initially thought it was a piece of piping but then saw its head as it moved.

He bravely managed to collect the two foot long snake in a bag and brought it to LK Pets in Letterkenny to see what could be done with it.

Emma Curran of LK Pets said they were delighted to get the snake.

“I think he got a bit of a fright alright but they are very friendly and can be easily handled if you know what kind of snake they are,” she said.

She revealed how the snake would almost certainly have died if he had been left out another day in the wild.

“It’s a lovely wee thing and it was obviously reared in captivity. It’s a Corn Snake and it’s quite young.

Emma said the snake, which can grow up to five feet in length, has become a bit of an attraction at LK Pets.

However, they would like to find the owner and return it to them.

If the owner is not found then Donegal’s own mini-zoo, Tropical World, has said they would be delighted to add the snake to their collection.