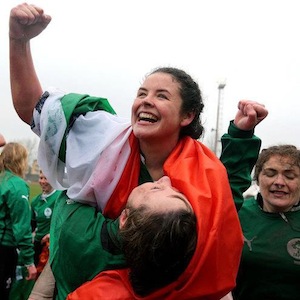 LARISSA MULDOON SCORED the first try of the Women’s Rugby World Cup this evening as Ireland opened with a dramatic 19-17 win over Australia at the Belfield Bowl in Dublin.

In a brave performance by the tournament hosts, Cappry native Muldoon popped in for a 20th minute try, which was in turn converted by Fahan’s Nora Stapleton for a magnificent start for both Ireland and the Donegal duo.  See Muldoon’s try below courtesy of Eir Sport.

That’s the way it stayed until Australia eked in front in the 59th minute when  Shannon Parry  touched down for a three-point advantage. However, two minutes later, Ciara Griffin grabbed Ireland’s second try and Stapleton converted to put Ireland back in the driving seat, 14-10 in front. Eleven minutes from time, Sophie Spence added another Irish try – with the TMO providing the official word – and it was 19-10 to the side managed by Tom Tierney.

Hilisha Samao scored a late try for Australia and with Ashleigh Hewson converting there was a nervy finish but Ireland held on to win and will play Japan in their second pool match on Sunday, with France the other team in Pool C.