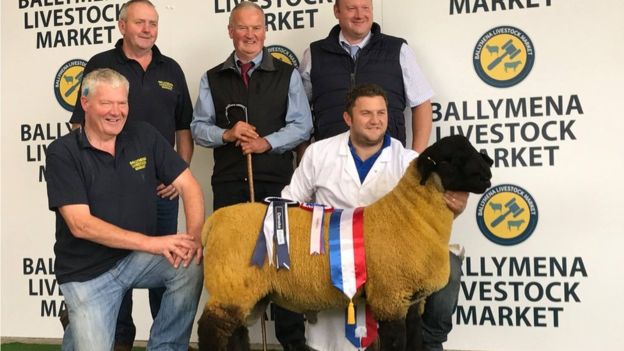 ‘Ewe’ won’t believe what record price a Donegal farmer paid for this lamb!

A lamb has been sold at a County Antrim livestock mart to a Donegal farmer for more than £13,000.

The pedigree Suffolk ram lamb was bought by Seamus Brown of Letterkenny, County Donegal, who will use it for breeding.

It was sold by a well-known breeder, Gary Beacom from Fivemiletown, at the Ballymena Livestock annual Premier Suffolk Show and Sale.

He told the BBC “You only get an opportunity to buy a lamb as good as this one once in a lifetime and when the opportunity arises you must be brave and go for it,” he said.

‘This guy has it all’

He is so correct that I can use him to breed with all my ewes, where maybe other lambs might have minor faults and you’d have to choose the ewes carefully.

“But this guy has it all – nice hair, good character, good top line, good colours, good mouth. I can’t find any faults with him.

“He has so much presence he makes a statement when he stands up there.”
The sale was a record price for Ballymena mart and, Seamus said, Northern Ireland too.