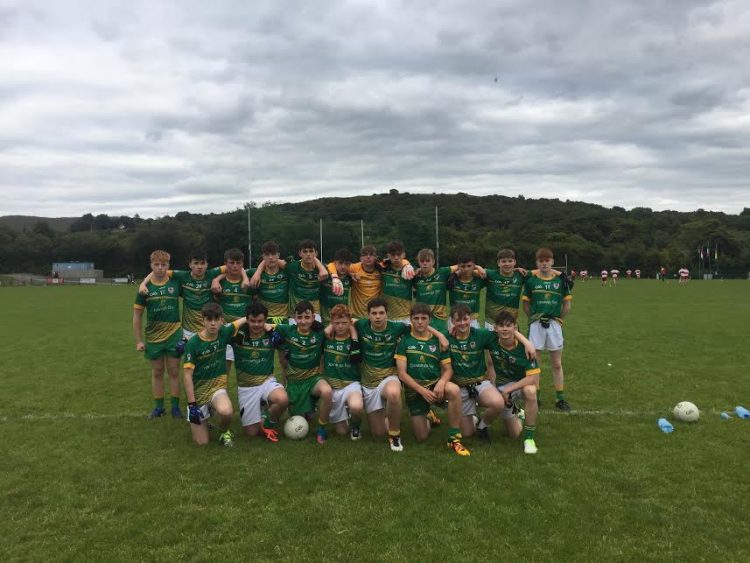 A profitable final quarter eventually saw Downings worm away from Glenfin to land the LYIT Donegal Under-16 Division Two League title at Foxhall this evening.

Downings outscored Glenfin 0-7 to 0-1 in that spell to take hold of a final that was bubbling nicely until then.

With Kyle McFadden exceptional for the winners, aided equally as impressively by Sean McGroddy, Downings were purring by the end, but Glenfin left cursing their luck in a contest that hung on mere inches.

Glenfin hit the woodwork twice in a three-minute spell at the start of the second half, when Downings led by a point, 0-7 to 1-3.

After Adam Marley reduced the Glenfin arrears to a point with a well-taken score, Keelan McMonagle found himself in with a chance of a goal.

McMonagle beat Aodh McBride with a neat shot across the Downings goalkeeper, but his effort bounced agonisingly off the inside of the post before being cleared to safety.

McGroddy pointed at the other end, stealing between two Glenfin defenders to steer over from Ethan Cullen’s centre, and the game swung once more when the An Gaeltacht Lár men were again denied by the paint.

Kaine McGlynn worked the chance for himself before smashing a thundering shot off the crossbar.

Marley, who had got the Glenfin goal late in the first half, arched over a superb free, but Downings soon found a groove as Glenfin ran out of steam,

By the time McGroddy got his fifth point of the day, Downings were seven in front.

Downings themselves might have rattled the net, but Tiernan McBride’s point just shaved the bar on its way over.

Ross Cullen had a late point for Andy Connor’s side while Glenfin were denied once more as Aodh McBride, the Downings ‘keeper saved superbly from a stinging Odhrán McGlynn shot.

Downings led 0-4 to 0-1 after 18 minutes with McFadden causing all sorts of problems for Glenfin while McGroddy was being closely-shackled by Sean Bonner.

McBride saved from Odhrán O’Donnell in the early moments while Glenfin netminder Kevin Gallagher had to be on alert to deny Shane Coll at the other end.

Glenfin got a lifeline in the 25th minute when Marley’s power and precision made the difference, fetching close to goal and slamming past the helpless McBride.

McFadden delivered a reminder with a lovely score from long-range late in the opening half and a hard-fought encounter was only decided when Downings began to inch away.