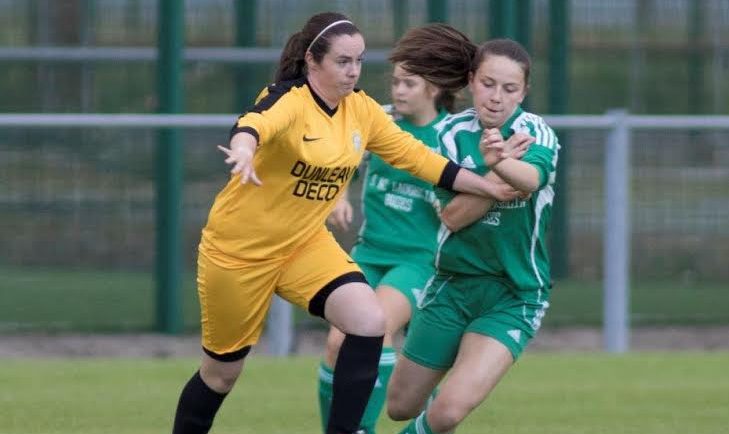 Bonagee, in fact, had to win the game three different times during a frenetic 90 minutes against Paddy Hannon’s understrength Greencastle.

In spite of depleted numbers, Greencastle put up a real battle of it, but Bonagee shook their heads clear to avoid slipping.

Bonagee, after being a goal down early on, led 3-1 and then 5-3, but Greencastle made them sweat late in the night.

Greencastle took an early lead when Shannon McDonald arrowed across into the far corner of the Bonagee net.

Bonagee drew level when Chantelle Grant – (pictured above) a year to the day from she underwent an operation to repair cruciate knee ligament damage – beat Sarah Faulkner from distance.

The hosts led at the break when Natalie McFadden hammered home from close range after Shannon McBride and Faulkner tussled for possession in the air.

Bonagee gave a debut to new signing Lauren Harper just after the break and the former Sion Swifts attacker added a new zest to a three-pronged Bonagee attack.

Saorla McGarrigle takes the ball out of defence for Bonagee

They increased the lead when Aisling Grieve superbly stoke in behind to finish well.

But Greencastle hit back. Emer McLaughlin finished to the bottom corner and Leah McGonigle made no mistake from a free-kick to draw Greencastle level.

Harper, with an exquisite, dipping effort hit the crossbar. In all, Bonagee were denied three times by the woodwork, but they were back in front when Denise McElhinney headed past Faulkner with a fine header.

Natalie McFadden in a tussle for possession

Another header, from Anna Doherty, increased the lead and Bonagee looked home and hosed.

But still they were rocked back on their heels when McLaughlin managed to get for her second of the night.

Bonagee’s experience, and numbers, counted in the closing moments as they held on in spire of a brave effort from the Inishowen side.

Taylor Feeny of Bonagee attempts to stop a Greencastle attack

A very wet evening in Swilly park was the setting for a good match between Swilly Rovers and Clonmany Shamrocks.

The home side started well putting the pressure on Clonmany.

The ball was passed up the pitch from the defence to Heather Dougherty, who sent the ball to Noelle McMenamin but her first shot was just wide of the post. Clonmany’s first attack came through their midfield when Mary Jane Doherty took on two Swilly players but her effort was denied by the Swilly keeper.

Swilly went one up on 20 minutes.

Near the end of the first half Clonmany began to put pressure on the home defence through Mary Jane and Caitlin McDaid, but one or two great saves by Alannah McFadden  kept Swilly ahead going into the break.

The second half began with both sides playing good passing football. Once again Swilly began the attack on clonmany through the midfield.

Great play by Catherine Grier sent Danielle Hynd attacking. Her shot from just outside the box was spilled by the Clonmany keeper but the rebound from Kerrieanne Coyle was just inches wide of post.

The home side continued on the attack with substitute Chloe Kerr passing the ball to Kerrieanne Coyle who found Heather Dougherty on the wing. Her cross into the box fell to Noelle McMenamin but her shot skimmed wide of the post.

Ten minutes from the end Swilly got their second goal. A cross from Dougherty reached Danielle Hynd who buried the ball into the back of the visitors net.

Both sides continued to press and shot from all angles until the dying minutes of the match.

Best for Clonmany was Mary Jane Doherty while a great team effort for Swilly Rovers gave the home side the win.