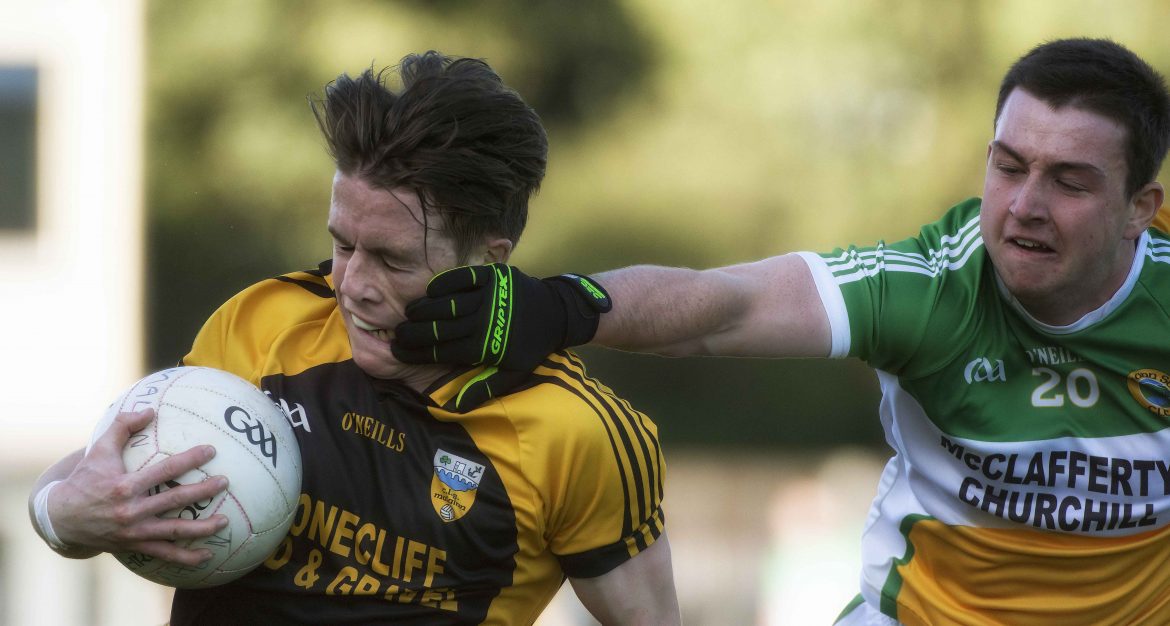 It was only when Benny Fildara tucked in a goal in the last minute that Malin could finally smell a vital win over Sean MacCumhaills.

The light had long since faded over Connolly Park, but Fildara – who lit up the night scoring 1-8 in total for his side – finished after his own shot came off the post.

Sean MacCumhaills scored just once in the second half, but Aaron Kelly’s free, in the fourth minute of added time, was a mere footnote to the tale.

By then, Malin were eventually in the clear.

They made life hard with a failure to put the issue to bed.

Terence Colhoun’s men could have been out of sight – and could have had a goal in the first half, too.

A fine 19th minute move from the hosts should have concluded with Dan McDaid tucking home at the far post. McDaid, picked out by Benny Fildara’s ball across the goal-face, didn’t connect and Mark Connolly scooped off the goal-line to keep the sheet clean.

And, with Malin a point ahead, they were in again in the 48th minute when Christy Fildara breached the rearguard, but his lofted ball, intended for the lurking Seamus Houghton, was intercepted by Joe Dunnion.

Brendan Fildara weaved his way in to get a shot away but, despite beating Eoin Gallen, his shot came off the post. Matthew Byrne was in for a follow-up, but was penalised for picking the ball off the floor.

The move for Fildara’s goal was almost an exact replica but, this time, after being denied by the woodwork, he applied the finish.

Trailing by four points at the break, Malin hit the opening five scores of the second half.

Fildara’s eighth point of the day, a close-range free in the 39th minute, had the hosts ahead for the first time since the midway stage of the first half.

In those moments when Malin were wrestling control back, Matthew Byrne hoofed over from the left and, from not too dissimilar a position, substitute Seamus Doherty swung over to perfection in the testing breeze.

2012 All-Ireland winner Declan Walsh put two between them, delightfully sailing over off the outside of his left boot, and Fildara’s goal meant they could breathe again.

MacCumhaills could point, with a fair degree of reason, to the moment, in the 44th minute when Byrne, already on a caution, fouled Brian Lafferty, but referee Andrew Mullin opted for leniency.

MacCumhaills, though, had only themselves to blame. Stephen Mulligan pulled a free wide and from close still, Lafferty and Kelly screwed frees off target in the final ten minutes and their failure to trouble the scoreboard operator until added time at the end of part two tells its own story.

Twice in the first four minutes, the lively Fildara registered to give his men the lead, but MacCumhaills were soon level.

Gallagher, who played under-21 for Donegal, has come back from a spell in Boston to add a real cutting edge to MacCumhaills this year.

The Twin Towns side haven’t managed to bridge the gap to the glory years of the 1960s and 70s but, since returning to the senior grade, have made it to a couple of quarter-finals.

Gary Wilson and Steven O’Reilly were members of the Donegal U21 panel that went to an All-Ireland final in 2010 and they helped keep MacCumhaills in it here.

Wilson swept over a delightful effort from the right flank and Steven O’Reilly got his co-ordinates spot on from the other wing moments later.

By the break, MacCumhaills were four in front, 0-10 to 0-6, though Malin – still reeling from that squandered goal chance – had the stiff north Inishowen wind in their sails for the second half. They made it count, but perhaps might have had an easier evening at the office.

Malin have flirted with lofty notions in recent times and have been to the semi-final stages twice, but Killybegs in 2013 and Glenswilly last year dashed their dreams of making it to the big day.

Malin ran eventual champions Glenswilly to two points, but the road back to the knockout phase stumbled on a roadblock when they lost heavily at Bundoran in May.

That defeat at Gaelic Park could still be their undoing but, with St Michael’s heading for Inishowen next weekend, Malin, at least, are in with a chance of advancing.