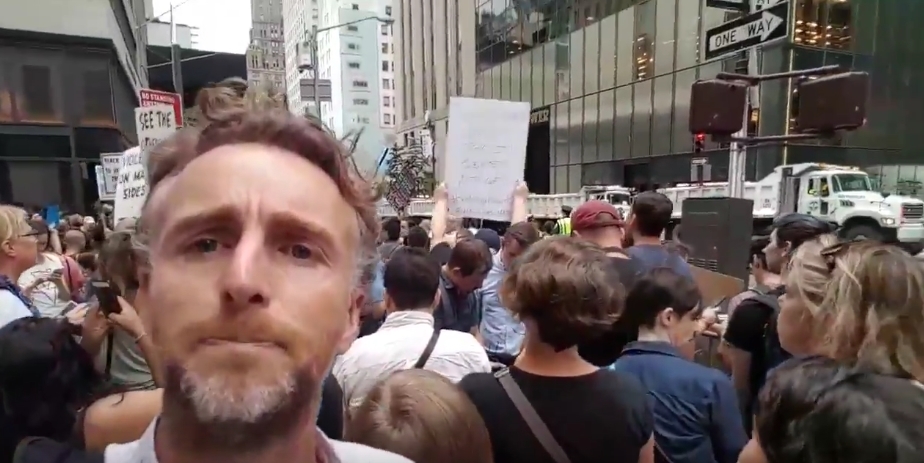 Ruairí McKiernan, the co-founder of the Ballyshannon born SpunOut.ie youth organisation, has joined in major protests in New York in response to what some say is President Donald Trump’s failure to condemn U.S white supremacist groups.

Ruairí, who is a Presidential appointee to the Council of State, has been meeting with community groups in New York and was motivated to join the protests at Trump towers following the recent killing of young civil rights activist Heather Heyer in Charlottesville.

“When I heard Trump was in New York I felt compelled to make my voice heard. It’s too easy to just sit back in silence. This is a pivotal moment in history. It’s horrific to see what is happening here in the U.S but thankfully people are becoming increasingly energised and vocal in their opposition to a type of politics that is reminding people of America’s cruel history of racial segregation. There’s no doubt that terrorism is something that needs to be tackled.

“However what Trump is doing is fueling terrorism, including extreme right terrorism, and using it to his advantage.”

“It was surreal to be outside Trump towers, to see the billionaire President arrive in the building where he conceived many of the policies that have led to people losing vital health care benefits, as well as attacks on immigrants and minorities, and the rollback of environmental protections.

“Ultimately Trump’s regime is eroding democracy and enriching his friends at the expense of the majority. It has to be remembered that he lost the popular vote by three million votes, and the opposition to his rule is massive.”

Ruairí says it is important for people to make a stand be heard on some of the issues that are facing the U.S and elsewhere. He says Ireland also needs to prepare for the possible visit of Donald Trump who was been invited here by Enda Kenny.

“The history of Europe has stark reminders of dictatorships and fascism. Look at what happened in Germany, in Italy, Spain, and Portugal. So called strong men play on the real concerns of people. They demonise minority groups and stir fear and hatred in order to strengthen their support. Hitler was also elected and it’s important we take these lessons from history.”

“In Ireland we have a long history of fleeing war, oppression, hunger and poverty and we could do we remember the suffering of our ancestors and having more empathy with those who need our help in the world today.

“It is also a fact that much of the terrorism and war in the world today is the result of the policies of people like Trump who seem to think violence can create peace.”

“We need real visionary leadership right now and silence isn’t an option. This includes protests if or when Donald Trump visits Ireland. The hate emanating from his regime means peace and democracy are at risk and this affects all of us. There are questions for Irish TDs on this – they need to be more vocal in condemning such racism and hatred.”