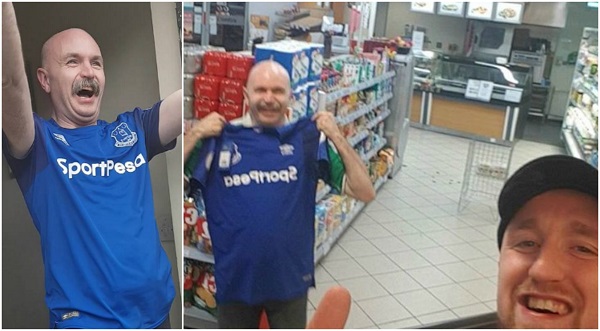 Seamus Coleman gives remarkable gift to one of his biggest fans

Seamus Coleman has shown enormous generosity to one of his biggest fans after they missed an Everton match due to illness.

Last week, Joe.ie reported on Athlone men Eoin and Francis. The pair struck up a friendship at Supermac’s, where Eoin works and Francis is a customer. The men bonded over their mutual devotion to Everton Football Club.

“I admire Fracis because even though he has had a lot go on in his life, He still carries around this infectious energy that makes you laugh and always brightens up my days at work,” Eoin says.

Eoin wanted to get Francis a present to say thank you for brightening up his work days so much over the past two years – and what better present to get him than his favourite football club’s jersey! Francis, who lives with Asperger Syndrome, was over the moon!

Another surprise was just around the corner for the men however, as Eoin’s manager organised for the pair to be whisked away to Liverpool on Thursday to see Everton’s match against Hajduk Split.

Sadly, when in Liverpool, Francis fell ill. Eoin says he had a vomiting bug, and although adamant to attend the match, he felt too weak to attend. Instead, the men, along with support worker Alan Duffy, spent the day in their hotel.

Promising to bring Francis to another Everton game when he was feeling better, Eoin set up a GoFundMe to help with the costs of going back over to Liverpool.

Seamus Coleman spotted the fundraiser, and donated a whopping €2,000!

Seamus said; “Sorry you couldn’t make it to the game Francis. I hope you’re feeling better now. Hopefully this helps get you and Eoin your flights and accommodation for another game and I’m sure the club will look after you as always.”

Eoin says he was speechless by Seamus’ generosity and says that having hit their goal of €1,100, the extra proceeds will now go towards Aspire Ireland.

“Not only is Seamus an inspiration to thousands of people across Ireland but he is also one of Francis’ favourite players of all time.

“The fact that someone of Seamus stature could reach out like this and help someone says alot about his character.

“These last few days have proved to me the world is a lot brighter of a place than we think.

“And because of people like all of you that donated you have helped give Francis another chance at the trip of his dream and in turn helped raise awareness and much needed funds for autism in Ireland.

“I only hope we can meet in person so I can show you how much this has meant to me. You are a modern day hero. Thank you from the bottom of my heart.

“Also all surplus donations will be donated to Aspire, The Asperger Syndrome Association of Ireland in Francis’ name. This has been a beautiful journey. Thank each and every one of you.

“This fund will now enable us to plan the trip well in advance, also ensuring Francis has plenty of time to wrap his head around it and digest the information properly.

“I will continue to leave the post up for another two days in the hope we can raise more well needed funds for Aspire Ireland.

“Thank you to everyone for all you have done I will be grateful to you for the rest of my life.”