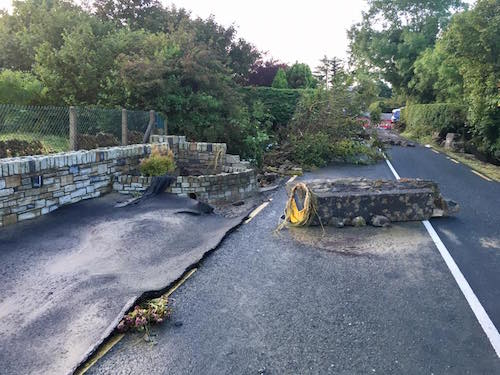 Donegal awakes after a night of carnage caused by widespread flooding

Donegal has awoken following a night of carnage caused by severe flooding due to torrential rain.

Houses were destroyed, trees were blown down and roads were literally washed away due to the force of the floods.

Donegal County Council was forced to implement an emergency action plan as hundreds of people sought help following the flooding.

Many were left trapped in cars as heavy rain literally surrounded many motorists.

Others were left terrified that their homes were going to be submerged in water as burrens broke their banks under the weight of water. 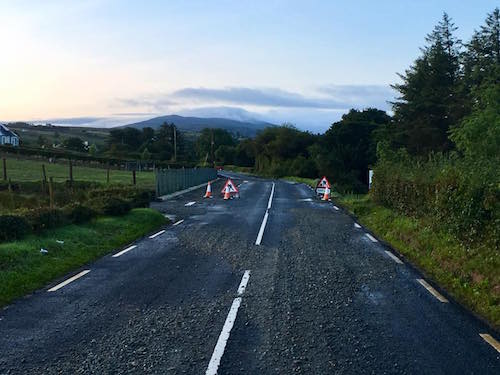 The morning after the night before. Clonmany roads after a night of heavy flooding. Pic by Jennifer Doherty.

The Buncrana Road, between Donegal and Derry, was covered in several feet of water as stranded motorists had to be rescued by the emergency services.

Hundreds of people posted videos online of the chaos including cars and jeeps being washed down streets under the force of flooding waters.

One of the worst areas hit was the Inishowen Peninsula along the border with Co Derry where villages and towns including Burnfoot, Burt, Bridgend and Buncrana were badly hit.

Donegal County Council has advised people not to travel on roads across Inishowen this morning as a massive clean-up operation of debris gets underway.

Both Clonmany Bridge and Cockhill Bride in BUncrana have been left damaged overnight with Cockhill Bridge remaining closed.

The council is providing regular updates on their Facebook page which is linked to Donegal Daily.

Huge bolts of lightning also lit up the Donegal skyline for several hours.

The severe weather has affected power supplies at over 1,000 homes in Moville, Redcastle and Quigley’s Point.

Power outages were reported in these areas and the ESB sent out crews to work overnight on the faults but many homes will not have power returned until later today (Wed).

Senator Padraig Mac Lochlainn, from Buncrana, was on the ground in his constituency last night.

Speaking from Burt last night, he said “The emergency services are overwhelmed dealing with this serious flooding crisis tonight.

“Can everyone keep safe tonight and we will all then work together to get the financial supports that will be required over the next while.”

Head of the Garda Traffic Corps in Donegal, Inspector Michael Harrison, issued a plea to drivers to remain vigilant and not to speed through flooded areas.

We will contnue to bring you regular updates througout the day.