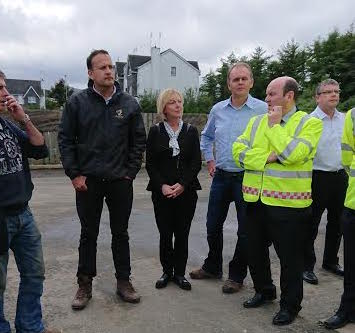 An Taoiseach Leo Varadkar has arrived in Donegal to assess the damage caused by this week’s flooding in Inishowen, Donegal Daily can reveal.

Mr Varadkar will survey for himself first hand the wave of destruction and devastation cause by Tuesday night’s unprecedented flooding.

Mr Varadkar is in Carndonagh, where he will speak to a number of people affected before going to Buncrana to meet with public representatives.

150 homes and 50 businesses were affected and it has been described as a ‘miracle’ that there were no fatalities caused by the flooding that has left 17 families in Inishowen homeless.

Earlier this week, Transport Minister Shane Ross and Minister of State for the OPW Kevin Boxer Moran traveled to Inishowen.