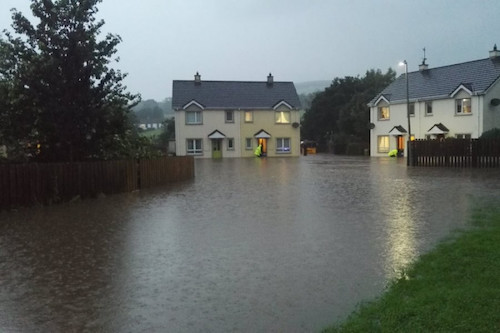 Support for victims of this week’s flood is continuing through the weekend.

Defence Force personnel, the Irish Red Cross, and Donegal County Council continue to help those in need after the catastrophic flooding that struck Inishowen on Tuesday.

County Council Offices in Buncrana and Carndonagh are to remain open this weekend to respond to the needs of those affected by the floods. Their opening hours for this weekend are 9 am to 5 pm.

A spokesperson for Donegal County Council says that they are still responding to the needs of flood victims, and encourage people to get in touch if they need assistance.

Donegal TD Joe McHugh said nine families were given support today by staff from the Department of Social Protection while council staff are continuing to provide accommodation to those left homeless.

Some families have been able to move into replacement homes today and Defence Forces personnel are continuing to support communities.

Speaking in Buncrana today where he thanked soldiers and council staff for their work, the Government Chief Whip said: “Community Welfare Officers provided assistance to nine families in Buncrana this morning and those staff remain on emergency standby if they are needed through the weekend.

“I also returned to Elm Park in Buncrana where homes were ruined in the flood. I was there on Wednesday in the aftermath of the flooding and today Defence Forces personnel were helping with the clear-up.

“There were also concerns for the safety of children in particular as the river fencing had been destroyed and Army personnel are erecting a new fence there.

“Dozens of families have now received emergency payments of €150 per person to allow them to buy clothes and other items and further payments will follow in many of these cases. I met one family of six who were able to receive €900.

“It is also important that usual means testing have been set aside under this humanitarian assistance so all those earning under €70,000 a year can access full payments with only slight reductions for those over that threshold.

“Further payments are available to purchase household items and in some cases structural repair.”

A Red Cross administered scheme for small business holders, voluntary groups and sporting organisations will be finalised in the coming days.

Minister McHugh said: “Soldiers helping with the clean-up are now doing so at homes where insurance assessments have been completed.

“I want to give a special mention to all those volunteers whose community spirit has been so incredible over the past few days and in particular local GAA clubs and sporting groups who have rallied around to offer further assistance to those worst hit.”