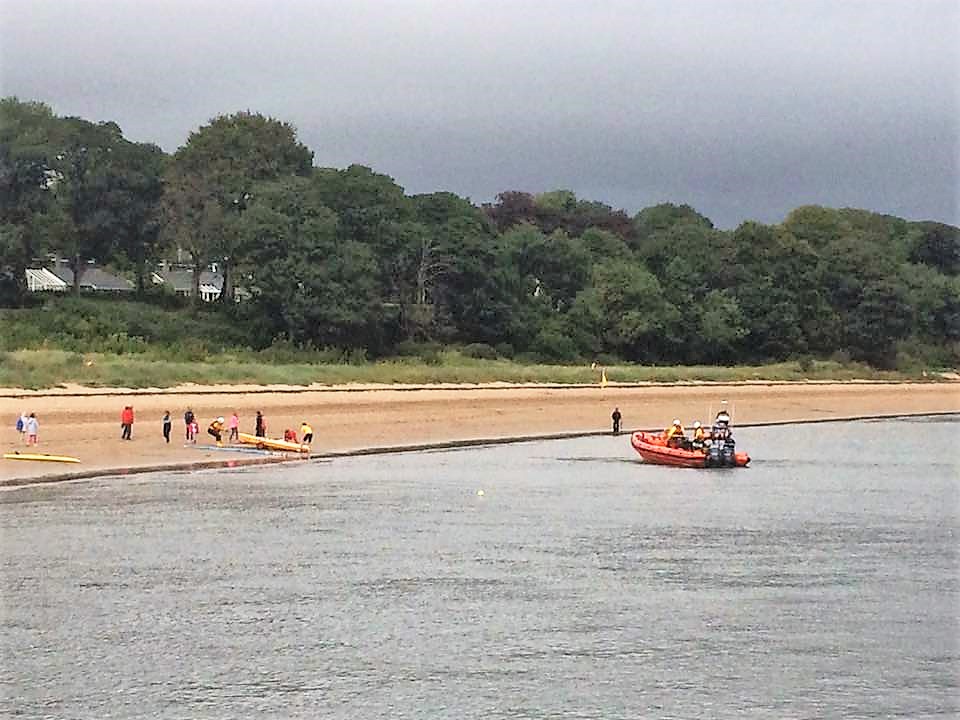 Two people’s lives were saved by a crew of unexpected heroes today off the coast of Rathmullan.

The Lough Swilly Ferry took passengers on a detour from a routine crossing from Buncrana when a sailboat capsized and a man and woman went into the water.

The uncle and niece from Co. Down were on holiday in Donegal when the accident occurred at 1.20pm. They were sailing off Kinnegar Beach when their small 10ft craft began to take in water and suddenly capsized.

The pair were wearing buoyancy aids to keep them afloat but were in the water for between 20-30 minutes before being rescued. They tried to swim to shore but got caught in the current.

The RNLI Lough Swilly lifeboat unit was dispatched to their rescue, but a much bigger help was at hand.

Edward Sweeney, skipper of the Lough Swilly Ferry, told Donegal Daily it was ‘pure luck’ that his vessel was close by.

“A 999 call was made to Malin Head Coast Guard, who contacted us to see if we could do anything. We could see a boat was in trouble and went to their aid. We put the door down and lifted them onto the ferry,” he said.

“By pure luck, when we got the call we were only 200 metres away from them.”

“We got them climbed onto to the ferry, but the man was in a bit of shock. By then, the lifeboat crew reached us and we brought them onboard too. We wrapped the man and woman in blankets, brought them inside and gave them hot drinks,” Edward said.

A Letterkenny ambulance was waiting at the pier for the ferry’s arrival to check over the rescuees. Fortunately, they were not injured and are both well after their ordeal.

The Lough Swilly Ferry service had to issue an apology to their customers this afternoon to say they were running 25 minutes late, although saving two lives at sea would make for a reasonable excuse for a short delay!

Edward said he was delighted everything worked out well in the end, in a situation which could have been much worse.

“Thankfully someone on the shore called 999. We normally keep an eye out for wee boats when we’re passing to see if any are in difficulty.

The rescue was a big joint effort from all sides, as another man also tried to paddle out on a surfboard to the pair’s aid.

Lough Swilly Ferry crewmen Edward Boyle and Gearoid Collum, along with skipper Edward Sweeney were all part of the extraordinary rescue crew today, who helped the RNLI volunteers with their mission.

Edward Sweeney, who has been navigating ferries around Donegal for 20 years, said a real disaster was avoided today.

“It just goes to show you, the man did go into shock and was not well and that can go two ways. That’s where the danger point is and we were lucky to get to them in time,” he said.