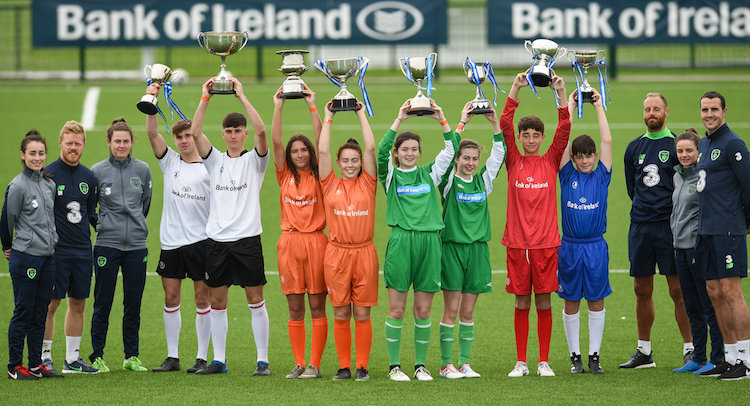 Walsh and Sweeney are both students at Mulroy College, Milford. They are the holders of the Senior ‘B’ Girls National Cup title for small schools.

The interest in schools football has increased over the last number of years with 38,000 players from 510 schools participating nationwide last year. 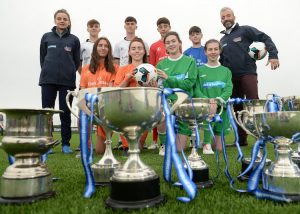 Seán Carr, FAI Schools Chairman said, “This is Bank of Ireland’s fourth year as sponsor of the FAI Schools Post Primary Schools competitions. Since the inception of our sponsorship agreement, we had great interaction from the participating schools. We look forward to seeing lots more children enjoying the schools football schedule throughout the academic year, being active, competing on an equal footing and having fun together”.

The numerous Cup and League competitions offer huge variety with small and large schools catered for. There are various divisions that accommodate boys and girls from First Year right through to Leaving Certificate.

The FAI Schools programme is co-ordinated at provincial level and schools are encouraged to sign up now for the forthcoming season as competitions will be commencing at the end of September.

Greencastle native Roma McLaughlin was among the international players present at the launch. McLaughlin featured for Moville Community College in FAIS competitions. She has completed the FAI / ETB Player Development Course in Clondalkin and was a key member of the Shelbourne Ladies team that played in the Champions League in the last week.

John O’Shea, Daryl Horgan and David Meyler were also at the launch at FAI headquarters in Abbotstown.