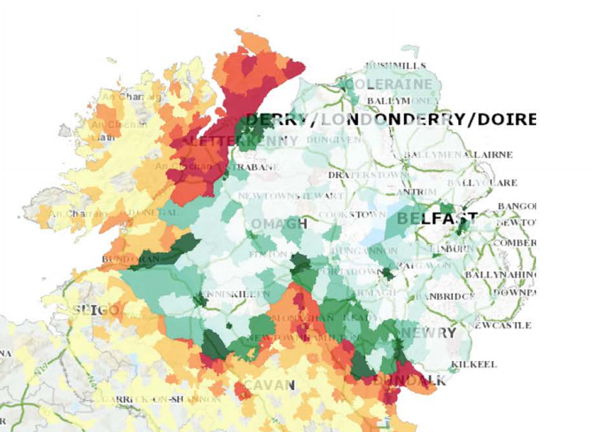 Donegal has the highest number of cross border commuters than any other county in Ireland, according to the latest CSO report.

An analysis of Census 2016 showed that 5,600 people leave Donegal to work or study in Northern Ireland. 76% of Donegal commuters travelled to Co. Derry.

Tyrone, Antrim and Fermanagh were the next most frequent destinations for Donegal workers and students. The above map by CSO shows that Inishowen and border towns have the highest number of people crossing the border for work.

The most frequent destination of commuters across the border was Co. Derry with over 4,320 commuters who stated this as their commuting destination. Just over 1,200 commuters travelled to County Tyrone, with just over a 1,000 travelling to County Armagh.

A total of 3,531 people nationally stated on the 2016 Census form that their place of work was outside the island of Ireland. The most popular overseas working destination was Great Britain; 2,144 persons commuted to England, Scotland and Wales with a further 1,387 commuting elsewhere in the world.