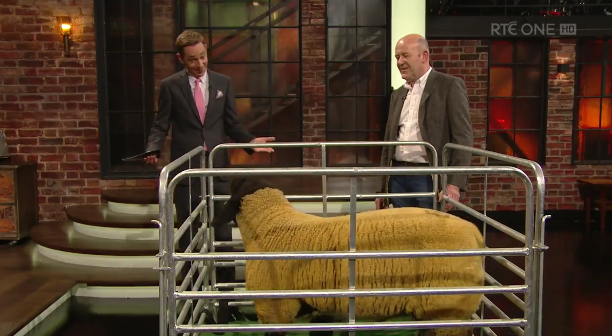 Watch: “He’s got some head on him”, Tubs reacts to Donegal farmer’s huge lamb

Donegal man Seamus Brown and his ‘wooly’ wonderful friend were the stars of The Late Late Show last night!

The pedigree Suffolk ram lamb set Seamus back €15,000 last month, a record price for the Ballymena Livestock annual Premier Suffolk Show and Sale, but Seamus couldn’t be happier with his new pet.

Named the most expensive lamb in Ireland, Ryan Tubridy was left scratching his head as Seamus’ lamb is ever so slightly bigger than other lambs he’s encountered before. Seamus told Ryan that his lamb’s birthday is January 5th, so he’s still a baby, “it’s a big big big baby,” Ryan commented.

Seamus explained that his club went to visit the five best flocks in Northern Ireland, and was instantly drawn to his lamb.

“I picked this guy as he was the best of the bunch.”

“Perfection in a lamb is difficult to find, they’re only born occasionally. This guy seems to have all the good qualities, I haven’t found any faults with him, he’s got a nice head-”

“He’s got some head on him in fairness,” Ryan laughed, “I’ve never seen anything like him…”

As Ryan said this, the lamb turned around and stared at Ryan as though he ‘herd’ what he said about his wooly head.

Seamus then gave Ryan a crash course in sheep reproduction, with giggly Ryan making the most of the dirty joke opportunities that cropped up during their conversation!

The vet collects semen with an artificial vagina, Seamus explained. “It’s then diluted and evaluated and if it’s good enough quality it’s used and each ewe gets 100,000 sperms.”

Ryan began to giggle and said, “right so there’s one for everyone in the audience.”

‘No wonder he’s wrecked!’ – Ireland’s most expensive lamb earns a bit of a rest on the #latelate pic.twitter.com/c0O6eqQ8Xn

He also learned a new term to describe specific “events”.

“Per… per one jump yes,” laughed Seamus.

Equipped with his new knowledge of “jumps” and sperm, he remarked “I don’t think I’ve learned so much in such a little amount of time!”

As they were speaking about the sheep’s “jumps”, the large lamb lay down on the stage sheepishly.

“No wonder he’s wrecked, take all the time you need!” chuckled Ryan.

Seamus also revealed that he named the lamb Heart of Gold, an apt name for this Casanova!

Seamus’ lamb provoked some hilarious comments on the #LateLate hashtag on Twitter:

The make-up department in RTÉ seems to have changed its foundation supplier. Even the lamb looked a bit orange. #LateLate #LateLateShow

Watch: “He’s got some head on him”, Tubs reacts to Donegal farmer’s huge lamb was last modified: September 3rd, 2017 by Elaine McCallig