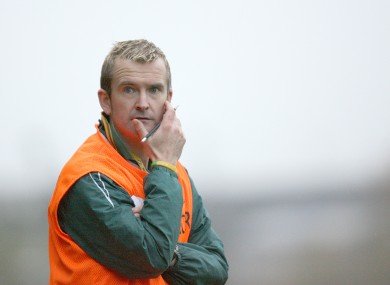 And then there were four: McDaid withdraws from Donegal manager race

Gary McDaid has confirmed his withdrawal from the race to become the new Donegal senior football manager.

In a statement from his club, Glenswilly, this morning, it has been confirmed that McDaid will not be pursuing the job, leaving Sean Paul Barrett, Declan Bonner, Cathal Corey and Seamus McEnaney to battle it out.

McDaid, a teacher at St Eunan’s College, had played a role in each of Glenswilly’s three Donegal SFC triumphs and was selector to Rory Gallagher in 2015.

McDaid, who has worked with Donegal teams at underage level in the past, has indicated his desire, instead, to become the new Donegal Under-20 manager.

The first round of interviews for the senior post are expected to begin this week.

“Gary McDaid was nominated by the Glenswilly Club for the position of Donegal Senior Football Team manger and he has given careful consideration to the role and feels at this stage it is not the correct time to pursue that particular ambition.

“Gary has decided that the Donegal U20 management role may be more suitable given the time he has available to him with a young family and his work life balance with his professional career.

“He would like to thank all those who have given him encouragement and support since his club announced his nomination.”