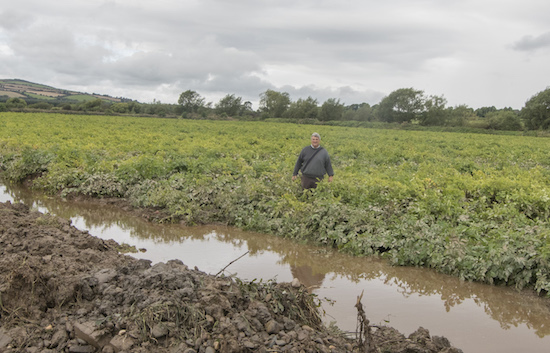 GOVERNMENT Chief Whip and Fine Gael TD for Donegal Joe McHugh has announced that applications are now open for an aid package for farmers in his constituency affected by the August 22 flood.

Today’s launch of application forms to local farmers follows the announcement of the scheme by Minister for Agriculture Michael Creed last week.

Announcing the DAFM Flood Damage Relief Measure, Minister of State McHugh said: “All strands of Government and all Ministers in Cabinet have worked hard to support local people in Donegal in a time of great need.

“The remnants of Hurricane Gert hit north Donegal on the night of August 22, hitting Inishowen particularly hard. The storm sent millions of litres of water through parts of the county and caused tremendous damage to homes and communities. This Government responded immediately to the crisis and that included a report compiled by Teagasc on the damage inflicted on farms.

“This latest measure from the Government allows farmers access to funds up the maximum allowable under EU regulations, €15,000 for any uninsured losses in the areas of to a) loss of livestock, b) loss/damage of conserved hay or silage, and c) clean-up of damaged agricultural lands and d) repairs to damaged fencing.

“I want to thank Minister Creed and his officials who have worked diligently on producing a simplified application form which is now available on the Department’s website.”

Minister McHugh also welcomed a short closing date for the administration of the scheme of September 29.

“This is to allow applications to be processed more quickly so that farmers can receive the funding as soon as possible and begin to fix the damage to their farms,” said Minister McHugh.

“I have met many of the farmers affected and I am continuing to talk to them about this scheme and the ongoing work of Government and the lead agency Donegal County Council and our ongoing response to the flood.”

The Minister said the farm relief scheme is in addition to supports being provided by other Departments, as part of the coordinated Government response to the flooding in the Inishowen Peninsula.

For example, the Humanitarian Assistance Scheme being administered by the Department of Employment Affairs and Social Protection, is an income-tested scheme which provides emergency financial assistance to households for essential needs as a result of damage to their home. It is designed to alleviate hardship rather than provide full compensation for damage. As of yesterday evening, 138 people had received payments under the scheme

The Department of Defence has already announced the emergency humanitarian support scheme for small businesses, community, voluntary and sporting organisations unable to secure flood insurance is in place to alleviate the hardship suffered and assist owner and local volunteers in getting back up and running. This scheme is administered by the Irish Red Cross with application forms available on their website.

Soldiers from the Defence Forces have also helped erect bailey bridges to allow repair work on roads in the area.

Today’s measure is part of a co-ordinated response by the Department of Agriculture with supports available to local farmers since the flood through the Animal Welfare Helpline and Teagasc officials who have visited many of the farms in the past three weeks since the flood.

Minister McHugh added: “Application forms are available from this afternoon. The Department has also set up a phone line and email address for advice.”