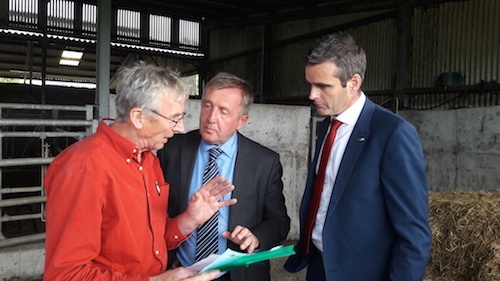 The IFA is to hold an immediate meeting this Thursday, September 14th in the Inishowen Gateway Hotel at 8:30p.m to discuss the announcement of the Flood Damage Relief Package.

This meeting follows on from a previous meeting which IFA had held last night in the Lake of Shadows Hotel Buncrana to discuss the immediate flooding situation in Inishowen.

The IFA meeting was attended by over 200 farmers, where Teagasc and Donegal County Council all gave updates on where the situation is in each of their respective areas. Insight Inishowen gave an overview of the services available to those affected by mental stress from the recent events.

Speaking at the meeting, IFA Flood Project Chairman Padraic Joyce said applications for aid by farmers in Donegal impacted by recent floods must be processed without delay, and payments made over the coming weeks.

At the meeting, farmers raised their concerns and highlighted the need for all losses to be taken into account. The scheme must cover fodder losses, structural damage, land damage, crop losses, fencing, farm roadways, and stock losses.

Padraic Joyce urged Minister Creed to deliver this support speedily and to all farmers who have been affected.

IFA President Joe Healy and Donegal IFA Chairman Michael Chance met with Minister for Agriculture Michael Creed twice to press for an aid package in the immediate aftermath of the flooding, Joe Healy visited Donegal, met with Minister Creed and secured his commitment to an assessment of losses as a first step.

IFA made clear to the Minister that financial support was necessary for the loss of crops, livestock and fodder, and for damage to land, farms, and fencing. Michael Chance said it is very positive that these requirements have been taken on board in the scheme. He said aid must also be available to cover the cost for farmers who suffered extensive damage to their farms during the flooding.

Michael Chance paid tribute to the positive reaction from the Department and Government officials and to Donegal politicians for their support in securing the delivery of an aid package by the end of this week.