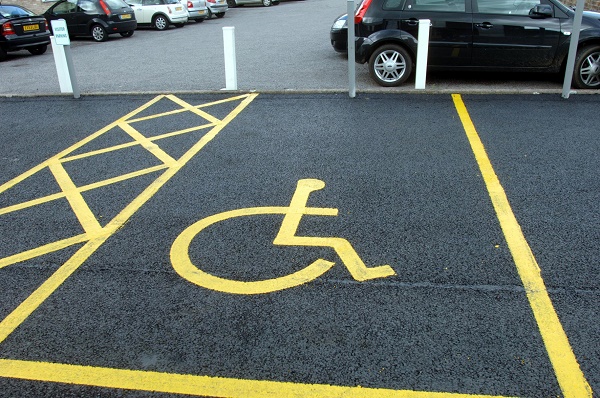 Drivers who park in disabled bays in Letterkenny without having a blue badge could soon be reported via an app and face automatic fines.

A text alert scheme is under consideration by Donegal County Council where the public can report offenders they spot illegally parked in disabled spaces.

Mayor of the Letterkenny Municipal District Jimmy Kavanagh has called on the council to consider introducing the text alert system on a pilot basis.

Cllr Kavanagh said an initiative in Gorey, Co. Wexford allows members of the public to report vehicles by texting the location of the disabled bay. Fines of €80 are then applied to non-blue badge holders.

The motion was raised at the September sitting of the Letterkenny Municipal District council.

Cllr Kavanagh said he believed the scheme would work well in Letterkenny, as members of the council have been contacted regularly on issues of parking in the town and the misuse of disabled bays. He said disabled bays at present are being abused in Letterkenny.

“It is a matter of trying to encourage good behaviour and it seems the spaces are not being used properly,” he said.

Cllr Kavanagh added: “This is meant to be a positive motion, it is not meant to stir up trouble or generate revenue.”

Cllr Michael McBride seconded the motion and suggested that parking bylaws are also presented on the app.

Donegal County Council said it is not considered to be in the public interest to set up such a system for the public to report traffic offences to the local authority. Illegal parking should be reported to the Gardai, the response said, and spot checks in the town showed that misuse of disabled spaces was not perceived to be a problem.

Drivers abusing disabled bays in Letterkenny could soon be reported via app was last modified: September 16th, 2017 by Rachel McLaughlin