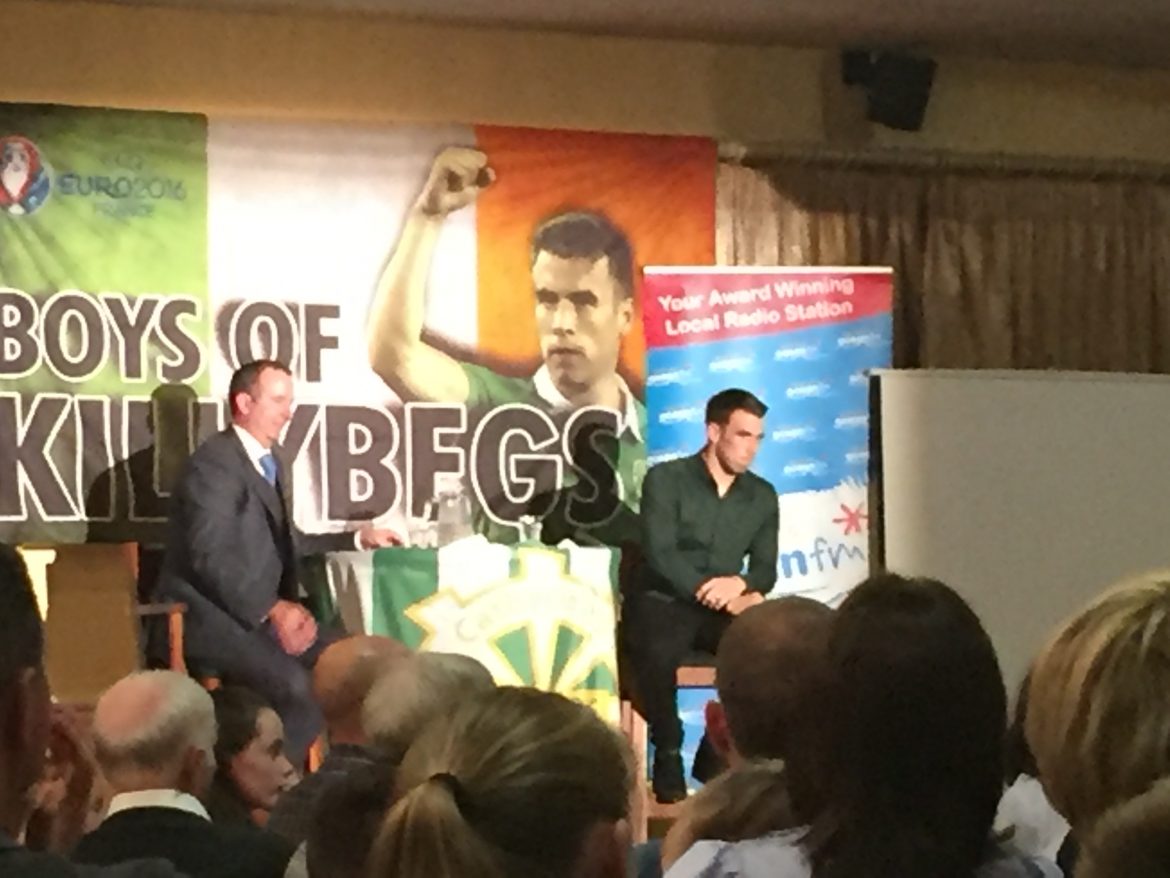 A CROWD IN the region of 700 are currently in attendance at the Blue Haven in Kilcar with Seamus Coleman coming back to his roots.

The Killybegs native is now the Republic of Ireland captain and his appearance tonight is a fundraiser for the club whom he represented before joining Sligo Rovers in 2006.

The morning after Coleman broke his leg in the World Cup qualifier against Wales in March, it took something a little special to bring a smile to his face.

He faced a lengthy lay-off as he awaited the full prognosis in St Vincent’s Hospital but if there was to be one consolation he says looking back now, it has given him time to spend with his wife Rachel and one-year-old daughter Lily.

As a father, Coleman, now 28, awaited his daughter’s first steps and was as surprised as anyone when they came that Saturday in the southside Dublin hospital.

“I broke my leg against Wales at the Aviva and the next Lily walked into the hospital. That’s as true as God. There I was sitting on there hospital bed and she jumps up on top of me.”

Of returning to Donegal, Coleman was delighted to help out his old club, one which he first represented as an Under-11, where Frankie Murrin was the manager.

“It’s great, it was brought to my attention a few months ago, the possibility of a night like this to fundraise for the club and I was delighted to play my part,” Coleman said.

“Look it’s where I started and I wouldn’t be where I am today without this club. I was delighted to come back. I remember scoring my first goal here. I can still see it going into the top corner and mum has the clipping at home still.

“I’m just looking forward to playing my part and meeting the people of Donegal or wherever else they travelled from; giving them a few stories or whatever else they ask me.” 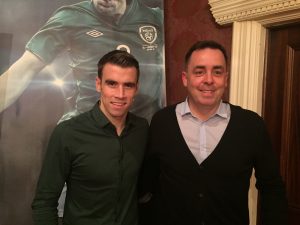 Coleman is now undertaking ball work at training with Everton but will not make the final two qualifiers next month which will go a long way to seeing whether Martin O’Neill’s squad will make next summer’s World Cup in Russia.

He added: “Back on my feet and working on my fitness and all the rest and slowly but surely getting there. When the injury first happened fast forward to getting on the pitch seemed a long way away. Now that it’s here, it feels like the time has gone quick and I feel like my full focus from when the injury happened until now was just about doing all I possibly can to make sure I’m, as fit as I can and as strong as I can when I come back.”

Earlier this month, a 1-0 home loss to Serbia following a 1-1 draw in Tbilisi against Georgia put a dent in Ireland’s hopes ahead of a home fixture against Moldova and then a potentially winner-takes-all fixture at the Cardiff City FC Stadium against Wales.

“It was tougher to watch the Serbia game,” Coleman said. “Obviously sitting at home watching the Gerogia game, you feel that little bit more distant and not so much part of it. With the build-up, the atmosphere, the game I missed the most was Serbia but I’m still pretty positive we can get a play-off place.

“We can’t overlook Moldova. If we can’t beat Moldova at home we don’t deserve to be going to the World Cup. We should be beating them and then the Wales game is massive.

“Performances might be good or bad but there’s no doubt about it, those lads when they play will always give 100 per cent – sometimes it mightn’t click but there isn’t one lad in that squad who doesn’t give it his all. That’s why I’m still confident.”