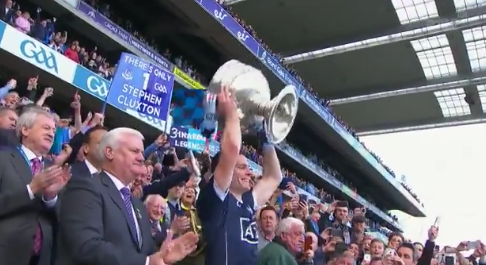 The nail-biting All-Ireland has come to a close with just one point between Dublin and Mayo.

This win makes a hat-trick for Dublin, having won against Mayo last year and Kerry the year before.

It seems that history has repeated itself as Mayo was one point short of a tie while facing Dublin last year as well, much to the dismay of Mayo fans who were hoping for the first All-Ireland win in 66 years.

Dublin’s match-winner Dean Rock: Diarmuid did very well to win the free and it’s my job to put it over. #DUBvMayo #RTEgaa pic.twitter.com/aqx5ul7iJ8

Dublin’s win means it’s the first time since the 1920s that the team have won three games in a row.

Stephen Cluxton has lifted the Sam Maguire and has applauded Mayo for a well-played final and their sportsmanship.

He also thanked Jim Gavin for his leadership.

A hat trick for Dublin as they overcome Mayo in All-Ireland Final was last modified: September 18th, 2017 by Elaine McCallig
Facebook0Tweet0LinkedIn0Print0
Tags:
all-irelanddublinFootballGAAMayoresult