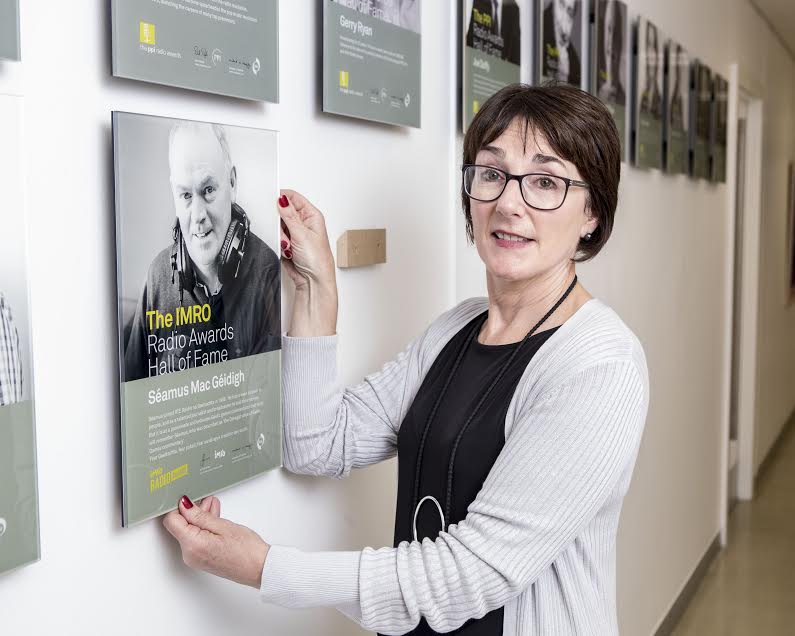 Séamus Mac Géidigh was inducted into the IMRO Radio Awards Hall of Fame posthumously at an event in the BAI’s office in Dublin today.

Séamus’s wife Dolores, his son Dónal, and his sister Ann with her husband Joe McElroy, were there to accept the award on behalf of the family.  Gearóid Mac Donncha, Acting Head of RTÉ Raidió na Gaeltachta, was also there and spoke at the event

Pictured as she mounted the her late husbands plaque on the Hall of Fame wall was Dolores Mac Geidigh. Credit: Iain White Photography

Séamus was working as Regional Manager of RTÉ Raidió na Gaeltachta in their Doirí Beaga studio in northwest Donegal when he passed away suddenly in July 2016.  He had spent 28 years working with the service.

He was a highly respected broadcaster, and was especially well-known and valued for his GAA commentary.  He was described by Fr Seán Ó Gallchóir as The Donegal Voice of Gaelic Games.

Speaking today, Gearóid Mac Donncha, RTÉ Raidió na Gaeltachta, said: “It is a great honour for any broadcaster to receive the Hall of Fame award, and we are very proud today that it will be awarded to our friend and colleague Séamus who is sadly no longer with us.

“It’s hard to describe all that Séamus did and the type of person he was.  He was, of course, a superb broadcaster on RTÉ Raidió na Gaeltachta, and he achieved so much in his chosen career, but he also made an impression on all those he met through his work, in the GAA, and in the community in general.

“He had friends everywhere he went, because he was someone who was interested in others and in their stories.  We miss our friend dearly, may he rest in peace.”

Sean Murtagh, Chairperson of the IMRO Radio Awards Committee said “the Hall of Fame inductees are very worthy recipients of this accolade and held in the highest regard by their peers.”

Eleanor McEvoy, IMRO Chairperson, said: “We are delighted to induct four of the most respected radio professionals on the island of Ireland into the IMRO Radio Awards Hall of Fame.  Each of them in their own way has made an indelible mark on the broadcasting sector and they rightfully deserve to take their place alongside the many other great Irish radio luminaries who have been honoured by their peers over the years.”

Others inducted into the Hall of Fame today include Linda McAuley from BBC Ulster, Billy McCarty (RIP) from WLRFM and Joe King, Broadcast Technical Services.