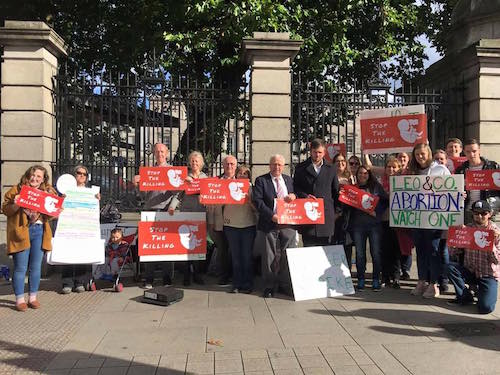 A local pro-life group have signalled their support of Tim Jackson’s hunger strike.

In a statement, they say they “salute and support” Jackson for “his heroic stand in defence of the right to life of the unborn child.”

“Tim’s reasonable request is that Leo Varadkar and each member of the Oireachtas Abortion Committee view the video on how abortions are performed before deciding on who can live or who can die,” the spokesperson said.

Yesterday Jackson claimed a partial victory after the Taoiseach said he was willing to watch a video on an abortion.

The central demand of the hunger strike by the Ballybofey man is that the Taoiseach and the committee watch the video of an abortion before going any further with plans for a referendum on the 8th Amendment.

Jackson, who began on Monday, says his body is weakening but he remains determined that the committee are fully informed of what happens the baby in an abortion.

“I think the least we all can do is know exactly how the child is killed, as it’s unmasks the reality of abortion in a debate clouded with euphemisms. It is a prerequisite for having a fully informed debate,” said Jackson.

The video is available at whiteflagmovement.com