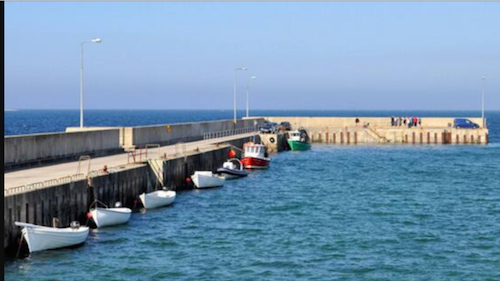 New Tory ferry and breakwater for Magheroarty Pier on cards

ISLANDS Minister Joe McHugh has announced his officials are to develop plans for the provision of a purpose-built ferry for Toraigh and for a breakwater to Machaire Rabhartaigh Pier to accommodate a new vessel.

The Minister of State made his comments after meeting with a delegation from Tory Island yesterday.

A new ferry for the island is expected to cost €4 million while the breakwater for the pier will cost a further €2.5 million.

Minister McHugh said: “As Minister for the Islands, it is essential for me that the residents of Toraigh are provided with all-year-round access to the mainland.

“I have listened carefully to the issues raised today and I have now asked my officials to develop plans for both a new boat and pier improvements. These plans will be worked on now in the time ahead with a view to bringing the plan to fruition in the medium-term.

“I want to reassure the islanders of Tory that I will have their best interests at heart throughout this process.”

Cllr. Séamus Ó Domhnaill has welcomed confirmation that €2.5 million has been announced for the provision of a breakwater at Magheroarty Pier.

In welcoming the news Ó Domhnaill commented “I am delighted that this money has been announced to provide a much-needed breakwater at Magheroarty pier which will ensure that when constructed the Pier can be used year round. The pier is currently in need of dredging at least once a year and the build of sand at the pier effectively means that it cannot be used on a dependable basis for fishing or ferry operations on a full yearly basis.

“Magheroarty pier is the main route from the mainland to both Tory and Inishboffin Islands as well as a hub for the local fishing community, the current silt and sand build up at the pier means that the pier is not fully functional nor can further employment be gained in and around the pier either by increased fishing or tourism.”

The construction of the breakwater will be a large long wall which will be constructed out into the sea which will trap the sand behind it, thus removing the need for dredging at the pier itself.

It will further create more berthing spots for either work or leisure crafts which in turn will allow for the tourism potential of the area to be fully realised and a safer more sheltered berthing harbour being created both at the existing pier and along the breakwater.

It will also allow for safe and dependable passage to Tory and Inishboffin
Islands from and to the Pier without the uncertainty of possible sand build up at the harbour.

Ó Domhnaill continued “ I was pleased to front the campaign to have this funding secured as I was fully aware of the massive need for this breakwater in Magheroarty as well as the need to cease the wasting of money each year on the dredging works which were occurring, I will now endeavour to ensure that the Council and the various Government Departments work in an expedient manner to bring this project to construction stage.”

The next steps in this process will be to carry out a study of tidal and wave movements in and around the pier so that the exact design and location can be determined.

Cllr O Domhnaill added “I believe that the local knowledge from those who use the pier will be paramount to the success of this design and therefore I will be asking that the relevant local stakeholders are engaged with as well as a full public briefing session taking place at each stage of the process.

“It is essential that this good news is not dampened by slow progress and I will at the earliest opportunity be requesting that the Council who will be the deliverers of this project draw up a realistic but short timeframe to bring this important project to construction and operation stage.”

Cllr Ó Domhnaill further commented that “The Pier at Magheroarty is an integral part of the local Cloughaneely mainland and island Community and every effort must be made to ensure that the work which will be carried out through this allocation of €2.5 million is correct and future proofed as well as being sensitive to the Beach and surrounding coastline.”

This announcement signifies a massive victory for those who have campaigned for this work for so long such as the Local Pier users, Coíste Tráigh Machaire Rabhairtaigh and the Public Representatives of the Glenties Municipal area ( both local and National) and I am delighted to have been front and centre in the delivery of this funding which is much needed.

He added “Credit must also go to Minister Joe Mc Hugh who listened to these calls and has delivered upon the needs as highlighted and I certainly hope that this is the first step in a short process which will see Magheroarty get a breakwater constructed and allow the pier to be fully functional for Fishing, Ferrying people to the islands and also to realise the massive tourism potential which exists in this idyllic Gaeltacht area along the Wild Atlantic Way.”